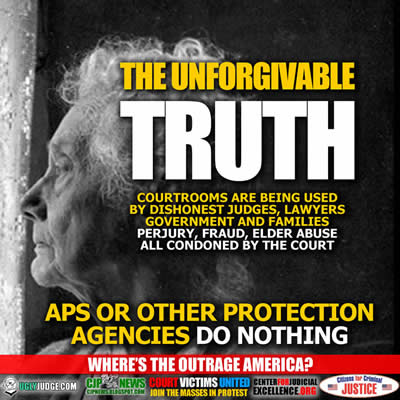 People don’t understand how simple it is to do this to the elderly. I was a police officer for the city of Los Angeles and used to think our courts were about justice. Around 2006 my sisiter Sylvia Schmidt who was disinherited by our father Franz L. Gettinger because she had not spoken to him for over 35 years. Caused by her own sociopath actions Sylvia began a scheme to rob her mother of her rights and live savings.

This is where I discovered what Conservator and Guaridanship is. They’re terms that the courts use are suppose to be about protecting the weak however their false images used and abused by Judges, lawyers, government and family. It all starts with Perjury, fraud, abuse and removing all the rights of the victim.

One would think going to court and filing a petition exposing the fraud and perjury would expose the criminals and stop everything. To my surprise nothing changed and (3) petitions with evidence were all ignored. The game now was to stall and create false legal fees. All approved by the bar and commission of Judicial performance. Once the wheel of crime starts no one wants to stop it because Judges and lawyers are making money.

The fact that over $200k in bank accounts was never reported to the probate department was ignored. That the petition to creat the conservatorship was perjured and family was never notified meant nothing to the judge.

The goal then is to stall, lie and create huge legal costs in the end they will hide behind “Statute of limitations“. Even admitting they committed crimes all while the judges and courts do nothing. Full story

Hear Sylvia Schmidt call Robert in 2003 via a telephone number she told court she did not have.
She is angry because she has been disinherited and does not want to accept its due to no contact with her father for over 35 years.
Note the two calls only seconds apart how she changers her tactics to pull at my emotions. One moment she says she really, really loves me and the next she is going to pull the trigger. Typical social-path and psychopath tactics
Original Audio left on my answering machine
https://soundcloud.com/robertagettinger/00-sylviaschmidt02-07-2003-01
Second call seconds later
https://soundcloud.com/robertagettinger/sylvia-schmidt-calls-back

Sylvia forced her mother into a home in Pasadena CA in 2006 with the reason she would be 5 minutes away where Sylvia and Gary A. Schmidt resided, however soon there after Sylvia moved over 3 hours away to San Diego County and her husband Gary A. Schmidt created a company San Marino Wealth Management to invest the estate of Gertrude Gettinger without court permission. The court and probate department was given evidence and notified of this crime and nothing was done.

Now comes yet another documentary about how Conservatorship and Guardianship are used and abused to take advantage of the elderly. Full Story

Last Will and Embezzlement