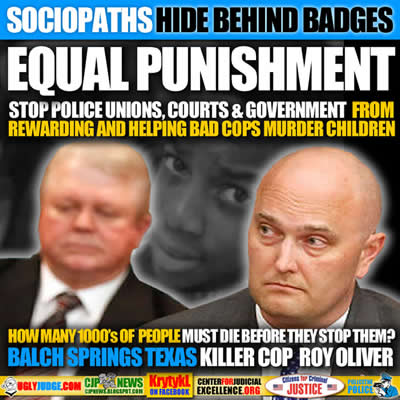 Killing innocent people and then covering it up with lies, manipulation of facts, character assassination has become the norm for Killer cops, police unions, courts and government. (Who work together scratching each other’s backs when they’re exposed?)

Balch Springs Texas Killer cop Roy Oliver is the typical trigger happy, reckless, unfit sociopath that finds his way into an authority position. It’s never been about hatiing all cops but when they help the bad ones to continue to kill and abuse the public they become accessories to their crimes. The scam and ploy is for the bad cops and their supporters to pretend the haters hate all cops.

Thousands of people are murdered by police who then investigate themselves and create their own outcome. See Killed by Police
Millions of people get abused each year and attempt to file complaints and are met by more dishonest police who have no business investigating or punishing their own. No second chances when deadly force is involved, how hard is that to understand? American’s don’t that they wear a badge; fact is any idiot today can get hired and there is proof of that.

The false image that police academies turn out a better cop is a downright lie, Trash in trash out you’ve only hidden the scum behind a fancy uniform and pinned a shinny tin badge on them. It’s understandable bad cops get hired but not when someone reports their abuse, is victimized by them and nothing is done.

The fact is most of the time when exposed, bad cops are allowed to retire, resign to escape all accountability and punishment. Their allowed to go on working at another department where they continue to kill, lie, rob and abuse the system. As they say “A leopard never changes his spots” and as well sociopaths, control freaks, bullies, criminals without records and insecure authority seekers with ego issues must be weeded out and banned from any authority roles period.

Why is it so easy to get deadly force and authority with only about 6 months of training? Ever notice the first thing police do when arriving at almost any scene is to recklessly pull a firearm? Shooting into homes killing victims then rationalizing it all with the bullshit excuse “we feared or I feared for my fellow officer”. How do we justify  6 months of training makes a life more valuable? When is enough, enough? They system is broken and how many thousands of murdered innocent people will it take till the government changes law, immunity and the process of rewarding murder?

Former Balch Springs officer Roy Oliver fired five shots into a car, striking and killing Jordan Edwards as he and a group of teens were driving away from a party in April 2017, according to Dallas TV station WFAA. Oliver had claimed he fired the shots in order to stop the vehicle from running over his partner.

Earlier, both Oliver and his fellow officer, Tyler Gross, had playfully interacted with teens at the party after responding to neighbors’ complaints that high school students appeared to be drinking alcohol at the event, reports The Washington Post. But no alcohol was found, and conflict only arose after shots were overheard from a nearby parking lot, sending the revelers out into the residential street.

Testimony showed that Oliver went to the patrol car to retrieve his gun while Gross stopped one car as it was leaving, then attempted to stop another in which Edwards was a passenger, according to The Post. Oliver said he heard Gross reading the second vehicle’s license plate into a police radio, then Gross broke a window of the vehicle as he ordered the driver to stop.

Oliver approached and then fired five shots within one second at the vehicle, hitting Edwards in the head as Edwards advised his fellow passengers to “duck, get down,” The Post reports,

Jurors who deliberated for 14 hours rejected Oliver’s defense that he was protecting Gross, who said in court that he did not fear for his life nor feel the need to grab his own weapon, reports NBC News.

“I just wanted them to stop,” Gross testified, according to WFAA. “I was not in fear at that point.”

Defense attorney Jim Lane nonetheless argued during his closing argument that Oliver fired to defend his partner, reports The Post. “He wanted to be a protector,” Lane said.

In a tweet, Texas Gov. Greg Abbott wrote: “This life should never have been lost.”

This was not an accident, it was a reckless action by a careless trigger happy monster who has no business with a badge or any deadly force.

NO JUSTICE UNTIL THE PUNISHMENT FITS THE CRIME

Before You start celebrating and think justice has been served, while you or I would be looking at death row or a long prision term. Police Unions, the courts and government (using your tax dollars) will become accessories to helping their own escape accountability and equal punishment.

It should also be exposed police all over America don’t want the public to know the image on TV and Movies is all glorified entertainment hype and BS. The image sold to the public that cops go thru lots of training and produces super protectors nothing more than propaganda. Fact is most are under trained, under qualified and unfit, but the goal is to find someone to fill the ranks, does not question what their told and goes scam. Speak out or try and fix it and your black balled.

The sad truth is had their been no body or dash cam footage officers would have perjured everything and manipulated the facts and evidence like common criminals looking at murder charges do. This is why police don’t like or want cameras, not because it really helps as evidence but because they can’t dispute it by lying and perjured police reports.

Witness who was in the car with Jordan Edwards testifies