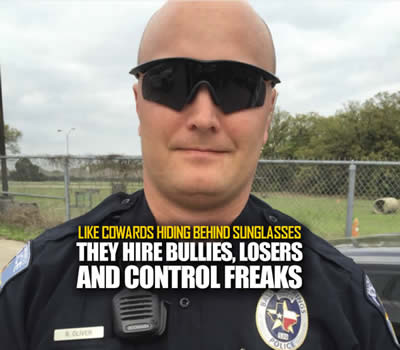 Take a good look at who we hire and give “Deadly Force” to. Imagine this person will be allowed to discharge his weapon around your children for no good reason which could kill innocent bystanders 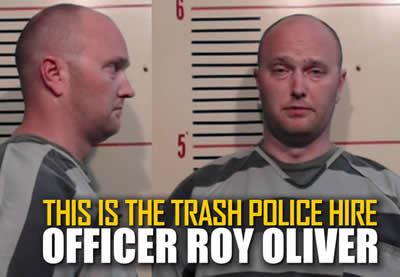 This is the trash police departments hire, which is not the problem. The problem is when exposed or reported Police rarely fire or prosecute such monsters and hold them accountable.

Meet Police officer Roy Oliver. If you think ANY IDIOT can get a gun and badge you’re right it’s not all that hard to get hired. Good liar, sociopath, no criminal history but you are in fact a criminal, bully, loser, control freak you name it they flock to law enforcement which is the easiest job to claim. Once a public servant and government muscle you’re protected by a broken system where justice all about money. You said it, money, where courts are all about how much justice you can by not about law or what is right.

Police officer Roy Oliver from a Dallas suburb who was fired shortly after he shot and killed a 15-year-old who was leaving a party could spend the rest of his life in prison. Officer Roy Oliver, the former Balch Springs officer, was arrested on a murder charge Friday night. The 37-year-old former officer Roy Oliver turned himself in and was quickly released after he posted bail on a $300,000 bond. Oliver killed Jordan Edwards when he fired a rifle into a car filled with teenagers who were leaving a party Saturday night. A bullet struck Edwards, who was a passenger, in the head.

Although police first said officer Roy Oliver fired the rifle because the car was backing up toward police officers, body-cam footage showed the car was actually driving away. Edwards’ family released a statement after the arrest warrant was issued, calling it “a bit of a reprieve in a time of intense mourning.”

The former police officer was arrested hours before Jordan’s funeral was scheduled to take place on Saturday. The family urged people not to protest at the funeral. “Though we understand what his life and death mean symbolically, we are not ready to make a martyr of our son,” the family said.

As the investigation continues into the death of 15-year-old Jordan Edwards, who was shot and killed by then-Balch Springs, Texas, Police Officer Roy Oliver, more and more details are coming to light. Recently, it was discovered that the prosecutor’s office had once filed a complaint about what it called Oliver’s aggressive behavior.

According to personnel records obtained by the Associated Press, officer Roy Oliver—who was fired from the Police Department following Jordan’s death—was suspended for 16 hours in December 2013 after the Dallas County District Attorney’s Office filed a complaint about his behavior while he served as a witness in a drunk driving case.

The records also detail periodic evaluations that noted at least one instance—on Jan. 27, 2017—when officer Roy Oliver was reprimanded for being “disrespectful to a civilian on a call.” However, the evaluation also called the reprimand an “isolated incident” and encouraged Oliver to be more mindful of his leadership role within the department.

The complaint indicated that prosecutors had a difficult time getting officer Roy Oliver to attend the trial, saying that he was angry that he had to be there. According to the complaint, officer Roy Oliver used obscene language that caused an assistant district attorney to send a female intern out of the room, and even cursed during his testimony.

“In an email from one of the prosecutors he states you were a ‘scary person to have in our workroom,’” then-Balch Springs Police Chief Ed Morris wrote in the suspension findings, AP notes.

Heath Harris, the former first assistant district attorney under Dallas County District Attorney Craig Watkins, said that he did not recall that particular fallout or what courts may have been involved. However, he added that he didn’t think the earlier complaint would inhibit the office’s ability to investigate Jordan’s shooting death.

“I don’t think that it will impact this investigation at all, other than the fact that it’s something that clearly the defense will try to use,” Harris said. “But DA [Faith] Johnson has already stated that the investigation by the public integrity unit will be independent and based solely on the facts of the shooting.”

A statement from officials at Dalworthington Gardens acknowledged that officer Roy Oliver had received an award for “meritorious conduct” as a dispatcher and that he had no documented complaints or disciplinary action in his work as a public safety officer or dispatcher.

Officer Roy Oliver was also in the U.S. Army, rising to the rank of sergeant while serving two tours in Iraq. He earned several commendations. In addition, he served two years in the Texas National Guard Reserves through 2012, AP notes.

Jordan was killed late Saturday night after he and his two brothers and two other teenagers were attempting to leave a house party in Balch Springs. Officer Roy Oliver opened fire on the vehicle with a rifle, with one of the bullets shattering the front passenger-side window and striking the 15-year-old.