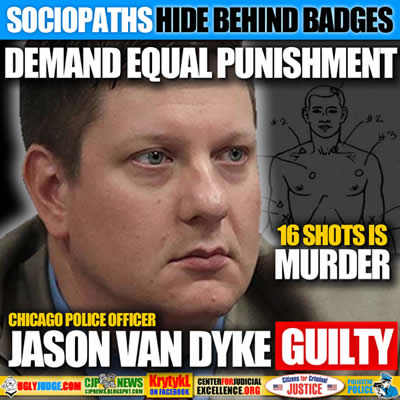 Guilty Killer Chicago Cop Jason Van Dyke
Officer Jason Van Dyke is a perfect example of the problem person that easily gets hired and then hides behind a fancy uniform and shinny tin Badge. Police Unions have striped citizens of their rights by giving police too much protection to the point they can kill without any accountability. The fact the incident was recordered on video helped prosecute officer Jason Van Dyke who perjured his report and statements when looking at murder charges. This happens every time police kill someone, they’re not treated the way the public is. Worse they’re given a chance to create a story and change the facts to fit their warped reality.

The entire Police Officer’s Bill of Right’s and Police Unions are designed to help dishonest Police escape prosecutuon or accountability. It’s time the tax payer stops being extorted out of billions of dollars in legal fees, pensions, paid vacations after they kill and victim pay outs. Police and their families must be held personally liable. NO MORE IMMUNITY WHEN THEY COMMIT A CRIME, ANY CRIME.

The Police Officers Bill of Rights

The three men were charged with conspiracy, misconduct and obstruction of justice for filing false reports in Van Dyke’s case, but the newly unsealed document points to numerous other unnamed officers who were at the scene or involved in the ensuing investigation of the shooting who allegedly worked to protect Van Dyke.

Questioning of a law enforcement officer should be conducted for a reasonable length of time and preferably while the officer is on duty unless exigent circumstances apply.