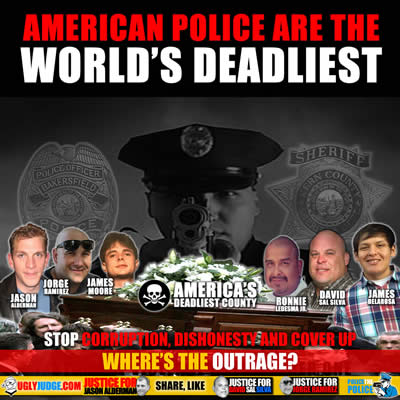 The World’s Deadliest Police
It’s a fact and has been long documented. Perhaps the reason so many people are murdered by police each year is a result of whose hired? The job draws problematic people, people who seek power, respect, control and deadly force. Often bullies, losers, mentally unstable, insecure, sociopaths and psychopaths along with those who feel less than end up with a gun and badge to solve their problematic desires to be important. This comes at the cost of thousands of innocent lives, many deaths which are never accounted for and hidden from the public.

The other part of the puzzle is how American courts treat killer cops. How judges, prosecutors, district attorneys and government who are generally in bed with police. When you have friends and co-workers who lack the capacity to be objective or fair there is no justice. You send a message to all police that because of your biased relationship with government “It’s OK to murder because we’ll back you up”. We’ll do all we can to make sure your life continues and you get to go home to your family. All the while thousands of families are destroyed, terrorized, ignored and kicked aside for speaking out.

This is how a system based on greed and money treats tax payers.

The Guardian has built the most comprehensive database of US police killing ever published. Compare our findings to those from the UK, Australia, Iceland and beyond

It’s rather difficult to compare data from different time periods, according to different methodologies, across different parts of the world, and still come to definitive conclusions.

But now that we have built The Counted, a definitive record of people killed by police in the US this year, at least there is some accountability in America – even if data from the rest of the world is still catching up.

It is undeniable that police in the US often contend with much more violent situations and more heavily armed individuals than police in other developed democratic societies. Still, looking at our data for the US against admittedly less reliable information on police killings elsewhere paints a dramatic portrait, and one that resonates with protests that have gone global since a killing last year in Ferguson, Missouri: the US is not just some outlier in terms of police violence when compared with countries of similar economic and political standing.

America is the outlier – and this is what a crisis looks like.

Fact: In the first 24 days of 2015, police in the US fatally shot more people than police did in England and Wales, combined, over the past 24 years.

Behind the numbers: According to The Counted, the Guardian’s special project to track every police killing this year, there were 59 fatal police shootings in the US for the days between 1 January and 24 January.

According to data collected by the UK advocacy group Inquest, there have been 55 fatal police shootings – total – in England and Wales from 1990 to 2014.

The US population is roughly six times that of England and Wales. According to the World Bank, the US has a per capita intentional homicide rate five times that of the UK.

By the numbers: US police kill more in days than other countries do in years