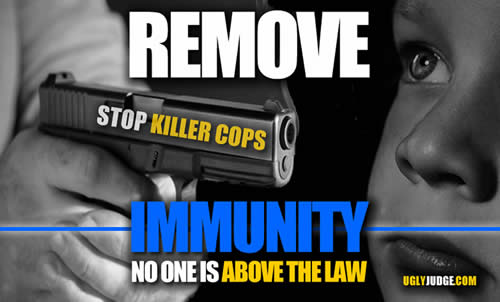 On the morning of Nov. 23, 2004, Malaika Brooks was driving her 11-year-old son to school when Seattle police pulled her over for speeding. When the officers gave her a ticket and asked her to sign it, Brooks refused, believing that she had been wrongly pulled over and thinking, mistakenly, that her signature would be an admission of guilt. The officers threatened to throw her in jail, and when Brooks still declined to sign, a sergeant ordered her arrest.

To push Brooks to step out of her car, one of the officers pulled out a Taser and asked her if she knew what it was. She didn’t, but told the officer she was seven months pregnant. The officers chatted in front of her, casually discussing which part of her body they would tase: “Well, don’t do it in her stomach,” one of them said, “do it in her thigh.” The officers twisted Brooks’s arm behind her back and tased her three separate times—first on her thigh, then in the arm, and then in the neck—before dragging her into the street, laying her face down, and cuffing her.

Brooks sued the officers to hold them accountable for their conduct. Six federal judges agreed that the officers’ use of severe force absent any threat to their safety violated the U.S. Constitution. But those same judges dismissed her case, relying on a legal doctrine called “qualified immunity.”

That doctrine has become one of the chief ways in which law enforcement avoids accountability for misconduct and, as Brooks’s case demonstrates, even proven constitutional violations. Ordinary people—whether they’re doctors, lawyers, or construction workers—are expected to follow the law. If they violate someone else’s legal rights, they can be sued and required to pay for the injuries they’ve caused.

Under the doctrine of qualified immunity, public officials are held to a much lower standard. They can be held accountable only insofar as they violate rights that are “clearly established” in light of existing case law. This standard shields law enforcement, in particular, from innumerable constitutional violations each year. In the Supreme Court’s own words, it protects “all but the plainly incompetent or those who knowingly violate the law.” It is under this rule that officers can, without worry, drag a nonthreatening, seven months pregnant woman into the street and tase her three times for refusing to sign a piece of paper.

Qualified immunity takes away the other avenue that victims of police violence should have available to hold police accountable. But while stories like Brooks’s—abuses of authority that go completely unremedied—occur every day in our legal system, there is a coalition building against qualified immunity, and there is reason to be optimistic that things will change.
The creation of qualified immunity

In the Civil Rights Act of 1871 (also known as the Ku Klux Klan Act), Congress gave Americans the right to sue public officials who violate their legal rights. In Section 1983 of the U.S. Code (the modern analogue of the 1871 Civil Rights Act), Congress said that if a public official violates your rights—whether via police brutality, an illegal search, or an unlawful arrest—you can file a lawsuit to hold that public official financially accountable for his conduct. The language Congress used was unequivocal: “Every” state official who causes a “deprivation of any rights” guaranteed by the Constitution and laws “shall be liable to the party injured.”

Initially, the U.S. Supreme Court recognized the straightforward application of this law. In the case Monroe v. Pape, for instance, a Black family, the Monroes, sued Chicago police officers who, in the early morning, broke into their home without a warrant, rounded them up, made them stand naked in the living room, and ransacked every room, emptying drawers and ripping mattress covers. The officers then arrested James Monroe, the father, and detained and interrogated him for hours. In an opinion written by Justice William Douglas, the Supreme Court recognized that the Civil Rights Act allowed the Monroes to sue the officers for violating their constitutional rights. The very purpose of the Civil Rights Act, the Court explained, was “to give a remedy to parties deprived of constitutional rights, privileges, and immunities by an official’s abuse of his position.”

Over recent years, however, the Supreme Court has largely gutted this promise. It has done this by creating out of whole cloth the legal defense of qualified immunity, and then vastly expanding it.

The Supreme Court invented qualified immunity in 1967, describing it as a modest exception for public officials who had acted in “good faith” and believed that their conduct was authorized by law. Fifteen years later, in Harlow v. Fitzgerald, the Court drastically expanded the defense. The protection afforded to public officials would no longer turn on whether the official acted in “good faith.” Instead, even officials who violate peoples’ rights maliciously will be immune unless the victim can show that his or her right was “clearly established.” Since the Harlow decision, the Court has made it exceedingly difficult for victims to satisfy this standard. To show that the law is “clearly established,” the Court has said, a victim must point to a previously decided case that involves the same “specific context” and “particular conduct.” Unless the victim can point to a judicial decision that happened to involve the same context and conduct, the officer will be shielded from liability.

The Supreme Court has recognized one exception to this rule, in Hope v. Pelzer. There, corrections officers disciplined a prisoner by handcuffing him to a hitching post for seven hours, with his hands above his shoulders, shirtless in the summer sun. At one point a guard taunted the prisoner by giving water to a guard dog in plain sight. Faced with these circumstances, and no prior case that had confronted similar facts, the Supreme Court ruled that the officers’ cruelty was “so obvious” that they should have had “fair warning” that their conduct violated the constitutional protection against cruel and unusual punishment. Far from creating a meaningful exception, however, courts frequently consider the circumstances in Hope to set the threshold for how egregious an officer’s behavior must be before he is considered to have “fair warning.”

And that is the law today: An officer who knowingly violates someone’s constitutional rights will generally be protected from suit unless the victim can identify previous judicial opinions that addressed the specific context and conduct. This is very far afield from what Congress sought to achieve in the Civil Rights Act. Instead of considering whether a person’s civil rights have been violated and, if so, providing that victim with a remedy, courts shut their doors to victims simply because no prior judicial opinion happened to involve the same facts.

Consider this example of how effortlessly courts use qualified immunity to sweep away serious constitutional violations: In April 2013, police officers in Texas responded to a dispatch describing a Black man in a brown shirt, who was firing his gun at mailboxes in a residential neighborhood. When the officers arrived, the man fired his gun in their direction and then hid himself from view. The officers set up a defensive position behind three vehicles and began ordering the man to put his gun down. A few minutes later, the officers saw Gabriel Winzer, a mentally impaired 25-year-old riding a bicycle, wearing a blue shirt, and carrying a toy gun in his belt. Within six seconds of spotting him, the officers shot at Winzer 17 times, chased him down and tased him. He died at the scene. The officers later claimed that they shot Winzer because they feared for their lives.

As in Brooks’s case, a federal appeals court concluded that the officers violated Winzer’s constitutional rights by using deadly force against him when he posed no threat to anyone. But nonetheless, according to the court, the officers were entitled to qualified immunity. To support that conclusion, the court offered one meager sentence of analysis: “We cannot conclude that Gabriel’s right to be free from excessive force was clearly established here.”
Why qualified immunity is a problem

Qualified immunity hinders the protection of civil rights in a number of ways:

1. First and foremost, qualified immunity means that victims of brutality or harassment by law enforcement generally get no relief in court and have no ability to hold offending officers accountable for their actions. That means the officers who commit the brutality and harassment—and the governments that employ them—have little incentive to improve their practices and follow the law. This undermines safety and justice for everyone, and particularly for people of color or vulnerable people who are most likely to be the target of police misconduct.

But when a case is dismissed based on qualified immunity, the victim loses and attorneys are not able to recover the fees for their work. Thus, as a result of the Supreme Court’s aggressive defense of qualified immunity, victims of civil rights violations may be less likely to find a lawyer who is willing to represent them and suits will not be brought in the first place.

3. Qualified immunity freezes constitutional law. As mentioned previously, in order to overcome the defense of qualified immunity, a victim must show that law enforcement violated “clearly established” law by pointing to a case arising in the same context and involving the same conduct. This has given courts a shortcut to resolving cases: Instead of reviewing, analyzing, and applying constitutional doctrine to determine whether a person’s rights were violated, a court can instead simply say that there has been no sufficiently similar case in the past. The result is that fewer courts ever resolve constitutional issues, and constitutional rights are hardly ever “clearly established.”

This shortcut has led to some outrageous results. In an opinion filed in March 2019, for instance, the U.S. Court of Appeals for the Ninth Circuit held that officers were immune from liability for the deliberate stealing of property simply because there was no “clearly established” case law governing the circumstances. In that case, police officers who had executed a search warrant seized about $275,000 in property: approximately $150,000 in cash, and another $125,000 in rare coins, but stated that they had seized only $50,000. In other words, the officers attempted to steal $225,000 while on the job.

The Ninth Circuit dismissed the lawsuit against the officers, granting qualified immunity because it had “never before addressed” whether officers executing a warrant could steal property. And, according to the court, it was not sufficiently “obvious” to police officers that stealing property under the guise of executing a search warrant violated an individual’s constitutional rights. As a result, the Ninth Circuit said that it “need not” even address whether the officers’ stealing was illegal.

This example should show the degree to which qualified immunity opens the door for wrongdoing on the part of law enforcement. No reasonable officer needs a case to tell them that stealing property is wrong. But it’s worse than that. Because the court did not say that the conduct was illegal, the law is still not clearly established that officers may not deliberately steal property when exercising a search. So an officer could, again, claim immunity for the same behavior.

As Fifth Circuit Judge Don Willett described this phenomenon: Victims of abuse “must produce precedent even as fewer courts are producing precedent. Important constitutional questions go unanswered precisely because those questions are yet unanswered. Courts then rely on that judicial silence to conclude there’s no equivalent case on the books. No precedent = no clearly established law = no liability.”

HOW A COP LOSES QUALIFIED IMMUNITY

Qualified Immunity and Ignorance of the law