Justice is just another word that means nothing in America 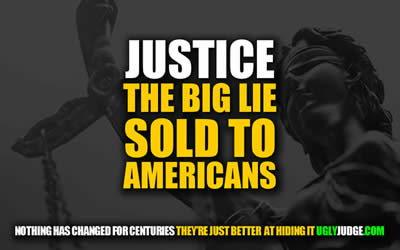 Justice is just another word to get you to go along with the propaganda that America is about equality, justice, rights and freedom. The fact is we’re all slaves to a corrupt system run by the rich and dishonest. Our legal system is a gang run by the Legal Bar where judges are given impunity and power to rule the masses. Police lives are put above the public in reward for being the muscle and protectors of the corrupt. Law is written to protect the dishonorable and criminal with money. America is no different than centuries ago when the dishonest ran things. Life was not worth anything and like Jeffrey Epstein who was quickly and mysteriously removed to avoid exposing even bigger criminals who often hide behind false images of being protectors or good. The biggest business in America is killing and by that I mean war, Trillions of tax payer dollars are given to the elite to build weapons of mass destruction. It’s all sold to the public behind false images of fake words. Justice, Equality, freedom and rights. Just try using them and you’ll find out they’re all lies. I found out how really corrupt our system is when I did the right thing to try and inform a probate court that a false petition based on perjury was used to hide embezzlement and elder abuse. Instead of stopping or investigating the real violators the courts protected them and rewarded them. SEE MY STORY

Hundreds of News stories and investigation and nothing changes

No justice for all — how our civil justice system is failing Americans
Equal Justice for the Poor, Too; Far too often, money—or the lack of it—can be the deciding factor in the courtroom, says Justice Goldberg, who calls for a program to insure justice for all Americans.
No Money, No Justice
No Justice for those with no Money
A ‘justice’ system that frees the monied and locks up the poor isn’t worthy of the name
How the justice system criminalizes the poor — and funds itself in the process
Making Justice Equal
Justice in America Episode 1: Justice for the Rich, Money Bail
Justice, Inequality, and the Poor

No Justice, No Peace: The U.S. Criminal Justice System

No justice for Epstein accusers as Queen denies ties – Galloway

Jussie Smollett case “an example of justice for the rich and powerful,” legal analyst says

Criminal Justice Reform Yes, but No Free Passes for the Rich!

Justice for All (of the Rich)

How America’s justice system is rigged against the poor