Police Lie and Manipulate the Truth when they do Wrong 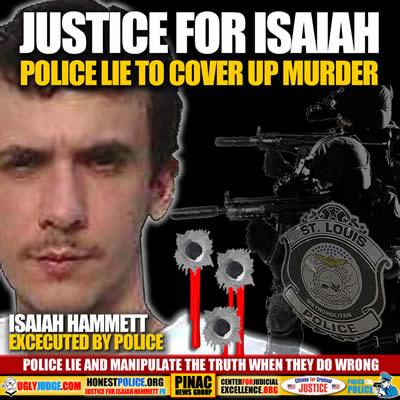 On June 7, 2017, a St. Louis Police SWAT team raided a home on South Kingshighway. Within minutes the house was riddled with bullets and a 21-year-old young man was dead.

The police immediately described a “firefight” inside the home. They described Isaiah Hammett as “lying in wait” to ambush them, tipped off by his external home surveillance camera.

On the news the police displayed an AK-47 and alleged Isaiah Hammett fired it at them. They cited possession of guns and drugs as “probable cause” to justify their aggressive SWAT raid.

But what does the evidence tell us about the raid?

According to the family, Isaiah’s surveillance camera hasn’t functioned for years, so he was not forewarned. There was no evidence of a flash grenade the police claim they used. Family and friends also report the AK-47 was not functional.

Most alarming, an independent forensic analyst, brought in by the family for a preliminary study, supports the family’s account that no evidence indicates any bullets were fired in the direction of police. All the bullet holes point only to incoming fire.

Isaiah Hammett was the caregiver for his disabled grandfather Dennis Torres, a Vietnam vet. They shared the house.

In public statements, Isaiah’s grandfather has recalled how he was awakened by gunfire. Isaiah Hammett entered his room, retreating from his own, to pull his grandfather to safety on the floor. When he asked who was attacking, Isaiah responded, “I don’t know. I love you.”

The grandfather has further stated Isaiah Hammett entered and left his room unarmed. As Isaiah entered the dining room he was heard saying, “Please don’t shoot me.” That is where he was killed.

His grandfather observed several officers standing over Isaiah Hammett  and then he heard two more shots. Bullet holes in the floor attest to the downward angle.

How many deaths will it take ’til we know….?

There are enough unanswered questions and conflicting statements by police to demand a fair and independent investigation of this shooting.

Police Lie and Manipulate the Truth when they do Wrong. This is fact and happens all the time. It’s another reason police all over America have lost respect and trust by the people. Time after time it’s been proven that police have trouble accepting that they can be wrong. There are many cases for victims being sent to prison when later DNA sets them free, Where police are informed of other suspects yet they ignore the fact and pursue innocent people pinning crimes on them. The resent exposure of police planting evidence has been going on for decades. Its only now with video police no longer can lie and are given the benefit of doubt. We have to stop trusting an image and take note to the fact that not all police are honest and law abiding.

In the case of the murder of Isaiah Hammett Vinny non of the evidence matched with police reports. Because after executing an innocent 21 year old police realized they’d made a mistake and had to create the event to support their use of deadly force. Had there really been video cameras as Police stated then where is the footage? Victims of police murders all over America find out the hard way how police attempt to destroy the characater of their victims by spreading false or misleading negative information to media. However that’s not done when police commit crimes, their protected and that info while important is kept from the public.

What Americans need to understand when you kill someone and you’re looking at murder charges “YOU LIE” and police are no different. They understand they’ll lose everything so better the victim take the fall than their own. What makes matters worse is judges and prosecutors who we rely on for  justice are in bed with police so often they’re not objective nor willing to help prosecute.

Have you ever tried to tell a cop he’s wrong, many of them have huge egos and attitude issues from thinking their in control and in charge. We hire some of the worst people with huge mental and control issues give them authority and deadly force. You can’t argue with someone like this and to make matters worst they don’t always hire the smartest or most educated.

So who does the public believe? The police make statements about how bad the victim was, there were guns (even if legal and not used for crime, drugs were found (small amount for personal use pot) , state he was a very bad dangerous person (yet there is no proof of that). This is commong and called character assasination and Police do it all the time. When the crime finally goes to court and non-biased investigators get involved we find the real truth.  Yet that damage is already done. People just don’t want to accept Police can lie, murder and do wrong.

EXAMPLES HOW POLICE LIE TO SUPPORT THEIR MISTAKE
If having guns in your home was reason to murder you there would be lots of dead cops
Notice the LIE “Officers returned fire” the only shots fired were by police.
They claim “quantity of marijuana” because they did not want to say how little was found.
15 guns found in home where officers executing warrant shot man, St. Louis police say
Suspect fatally shot after firing shots at police serving search warrant
Isaiah Hammett Killed Firefight With SWAT Team in South St. Louis, Chief Says – Riverfront Times (blog)
Police: Suspect fatally shot after exchange of gunfire with SWAT team in south St. Louis
St. Louis Police: Man Killed After Opening Fire on Officers

St. Louis, MO — On Wednesday, St. Louis Police Swat team members executed what appeared to be a no-knock raid on a home, killing 21-year-old Isaiah Hammett. According to the Riverfront Times, Hammett was suspected of dealing in drugs and weapons, but his family is telling a very different version of events from what the St. Louis Police Department is sharing.

“A bunch of shots was going on. My grandson was trying to protect me, threw me on the floor,” his grandfather told reporters. “Then I hear screaming. He went in the dining room. I see my grandson laying dead on the dining room floor. And police SWAT team out front told me to come out. I come out. I didn’t know what was going on,” he said still in an apparent state of shock and disbelief.

Police say they had a search warrant to enter the home, but the grandfather made no mention of seeing a warrant or hearing police announce their presence. Nonetheless, the SWAT team penetrated the home. They’re now saying Hammett opened fire on them, according to Lt. Colonel Lawrence O’Toole, acting St. Louis Police Chief.

O’Toole told reporters, “I can describe it only as being a firefight that was inside the residence…Numerous rounds were fired.”

Gina Torres, Hammett’s mother said the young man and his grandfather believed someone was breaking into the home, and tried to hide. “The cops came in and they killed my son,” Torres said matter of factly.

“I needed my son and I feel like dying right now,” she cried in the street as she conveyed her heartache. “For no reason. They shot my son to death,” Torres said, tears streaming down her face.

O’Toole said his SWAT officers did a “Fantastic” job executing the search warrant and that Hammett shot at them first with an AK-47 they recovered at the scene. The semi-automatic rifle is sold in gun stores throughout the U.S. and is not illegal to possess by most citizens. O’Toole proudly displayed the rifle, which is commonly used for self-protection against such home invasions.

St. Louis has a history of Police shooting innocent people