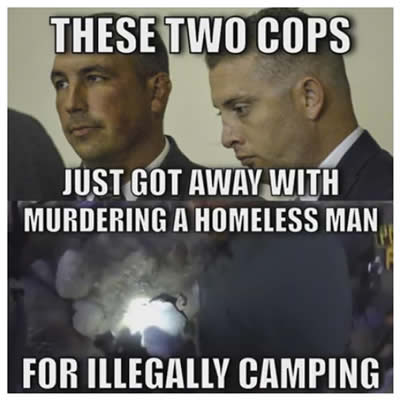 The problem is not the crime but the prosecution and courts who stand behind police even if guilty. These two obvious killers who never should have been hired are getting away with murder. This is typical and not a case of a “few bad apples” but legions of problem people who are employed by police agencies all over America today.

Albuquerque, NM — Two Albuquerque cops charged with the second-degree murder of a homeless man suffering schizophrenia — whose only crime had been illegally camping — have now been let off the hook for the killing after a hung jury left a judge no choice but to declare a mistrial.

Retired Officer Keith Sandy and Officer Dominique Perez had been charged for the murder of 38-year-old James Boyd in August last year — after Albuquerque police cleared them of wrongdoing — in a rare case where cops were forced to face legal responsibility for a highly questionable and brutal killing.

A mistrial was declared by Judge Alisa Hadfield on Tuesday when only three of twelve jurors voted to convict the two officers — which, though deplorably typical, seems inexplicable given officer helmet-camera footage and several nasty details in the case.

Prior to the fatal shooting, a conversation involving Officer Sandy was captured on tape, revealing not only a lack of compassion or understanding for those with mental health issues, but utter disregard for human life:

Sandy: For this fucking lunatic? I’m going to shoot him in the penis with a shotgun here in a second.

Police had been summoned to the rocky hillside location of Boyd’s illegal campsite in March 2014, after receiving calls of someone acting erratically. As footage from an officer’s camera-bedecked helmet subsequently revealed, a small army of 19 cops — some sporting a ridiculous amount of tactical gear — and a K-9 officer responded to the scene.

Boyd begins gathering his belongings and seems to be complying with police demands to leave, when one officer abruptly fires a flash-bang grenade — completely disorienting the man who had been diagnosed with schizophrenia, an illness characterized most often by visual and auditory hallucinations.