It’s Time For Some Fucking Accountability 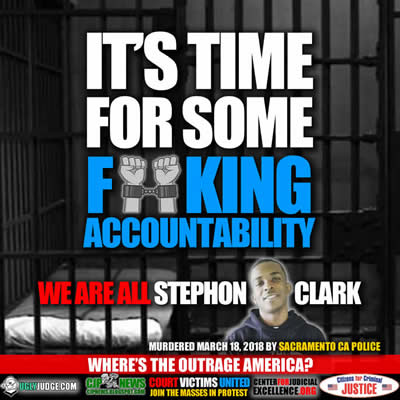 “It’s time for some fucking accountability”

STEPHON CLARK SHOULD BE ALIVE, Former Sacramento Kings forward Matt Barnes on Saturday led demonstrators in California’s capital in a protest rally over the police killing of an unarmed black man who — an independent autopsy found — was shot multiple times in the back. More

For decades Police and the courts have worked together to hide and distort the truth, to cover up murder (nothing to do with protecting or law). The fact is law is being used against us to help dishonest, mentally problematic people who want to kill where there is no threat or fear. These cowardly con-artist when facing murder charges and the loss of their job then abuse the “I fear” excuse. The real problem is we’re hiring control freaks, sociopaths, pyshopaths, insecure people seeking power and control, egomaniacs, bullies and murderers who all hide behind a badge and fancy uniform which gives them immunity and a liscense to commit crimes, abuse, terror and murder. They hide behind a false image selling themselves as “I want to help people” which is a lie. The commone tactic of socio and psychopaths is to use images (acting with the tactic “wolves in sheeps clothing”). Often Doctors, Judges, Lawyers and police are the false images.

STOP TRUSTING IMAGES, BADGES, ROBES OR TITLES FRAUDS HIDE BEHIND
A uniform, badge, robe or title are nothing when the person wearing them is a liar and fraud

TYPICAL IMMORAL TACTICS USED BY DISHONEST POLICE AND COURTS
Delay autopsys, investigations, prosecution
Destroy the character of the victim with false or misleading info, leak false info to media
Hide Evidence about for person committing the crime, their history, previous crimes and records
Destroy evidence (video, audio, witness) terrorize witnesses, Delete videos and audio
Twist and manipulate law, grand jury and the jury, Get coronor to manipulate results
Refusal by prosecuters, judges and the courts to use law or prosecute
Delay for statute of limitationProtect the criminal no jail time
Allow criminal extended amounts of time to fabricate a story, perjure reports
Allow criminal to use tax paid legal services
Failure to notify family or those involved as to miss court hearings
Out of control tax payer paid Police Unions (taken from officer tax paid salaries)
Manipulated Police officers Bill of RIghts abused to help commite murder and crime

You do it you are in jail day one, Police do it and nothing happens
“NO OFFICERS HAVE BEEN CHARGED”

Ultimately nothing is done and these monsters are rewarded with PAID administration leave or posh desk jobs. They’re allowed to resign instead of being fired to retain their POST certifcation and full benefits paid by tax payers (Felons can’t posses guns or be hired). Many go on working and are even promoted and further infect and promote their socio and psyhcopath behaviors.

AMERICA MUST LEARN TO STOP TRUSTING AN IMAGE, People must earn respect by their actions not the uniform, badge, robe, bar license or degree they possess. Morals, Integrity no longer means anything with the invasion and epidemic of problem people getting hired and promoted.

CAN YOU HEAR US NOW?

The protests came one day after a forensic pathologist retained by the family of Stephon Clark said police shot the 22-year-old eight times, including six wounds to his back.
“It’s more than color,” Barnes told the crowd at the second of two rallies Saturday. “It comes down to wrong and right.”

Stephon Clark’s death in Sacramento: ‘You watch a human being executed — for what?

BECAUSE NO ONE IS ABOVE THE LAW, not even those sworn to enforce it, judges, police and government

REMEMBER there IS NO video of Stephon Clark committing any crime, never any threat, never acted agressive orcharged anyone, Had nothing that remotely looked like a tool or gun

VIDEOS
Watch: Here’s what happened in the shooting of Stephon Clark

How the Stephon Clark shooting unfolded