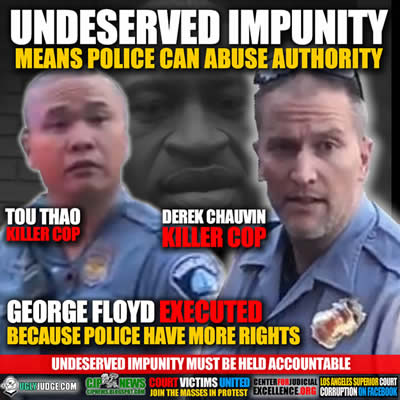 George Floyd EXECUTED by Minneapolis Police Officer Derek Chauvin and Officer Tou Thao
This was by all means a public execution by dishonest, abusive and racist police who act as Judge, jury and executioners. This is all too common and happens daily all over the US. Police have no accountability. Police unions are in bed with courts and have manipulated law and code behind the public’s back. The American Constitution has been superseded by a Police Officer’s bill of rights which helps bad police stay employed, avoid prosecution and hinder any proper investigation to obtain the truth and facts. While our Justice system has obviously become a joke because it has nothing to do with anything about justice and everything about the all mighty dollar. Lawyers and judges have been proven beyond the doubt as dishonorable, criminal and have weaponized our legal system in their favor.

We all watched the horrific death of George Floyd on video as witnesses begged the police officer to take him into the police car and get off his neck. This abusive, excessive and inhumane use of force cost the life of a man who was being detained by the police for questioning about a non-violent charge.

What happened: The incident began around 8 p.m. on Monday when George Floyd was suspected of using counterfeit bills. A report was made at Cup Foods, 3759 Chicago Av., where he matched the profile. The Minneapolis police were responding to the report and noticed him by his car.

The aftermath: Since the incident, four officers of the Minneapolis Police Department have been fired and an investigation on a potential civil rights violation is being led by the FBI and Minnesota’s Bureau of Criminal Apprehension (BCA), which investigates police shootings and in-custody deaths.

SERIAL ABUSER POLICE OFFICERS GET PAID VACATIONS AND NO PROSECUTION
Upon the officers’ firing, Minneapolis Mayor Jacob Frey tweeted support for the decision. In earlier statements, Mayor Frey said that, “that race played a part in the encounter.”

The Minneapolis police officer shown on video kneeling on George Floyd’s neck as Floyd pleaded for help, along with Officer Tou Thao who stood by and watched, have both been involved in use-of-force incidents over their careers.

Killer cop Officer Tou Thao (FIRED) but not prosecuted
He went through the academy in 2009. In 2017, Lamar Ferguson sued Officer Tou Thao and another officer, Robert Thunder, for excessive use of force. Ferguson and a woman who was eight months pregnant were walking home when Officer Tou Thao and Thunder stopped and searched them without cause. The officers handcuffed Ferguson, and Officer Tou Thao threw him to the ground and began punching him, while Thunder kicked him.The officers took Ferguson to the hospital for treatment. Afterward, they escorted Ferguson to jail wearing only his underwear and T-shirt, rejecting hospital staff’s requests that he be allowed to fully dress. Officer Tou Thao said they arrested Ferguson due to an outstanding warrant. He said he only punched Ferguson after one of Ferguson’s hands slipped out of the handcuffs. “He tries to pull away,” After this point he’s actively resisting arrest. So I had no choice but to punch him in the face. The case settled for $25,000. Officer Tou Thao and another officer had previously been sued in 2017 for excessive use of force for punching a man in the head for resisting arrest on an outstanding warrant. The case settled for $25,000.

NEWS STORIES
George Floyd’s family says Minneapolis officers should face murder charges amid national outcry
Black and Asian Communities Unite in Outrage After Officers Murder Handcuffed George Floyd on Video
George Floyd’s family says four officers involved in his death should be charged with murder
Video shows Minneapolis cop with knee on neck of motionless, moaning man who later died
What we know about Derek Chauvin and Tou Thao, two of the officers caught on tape in the death of George Floyd

The Moments Before George Floyd’s Death