Drew Peterson Hid behind the Badge for 30 years 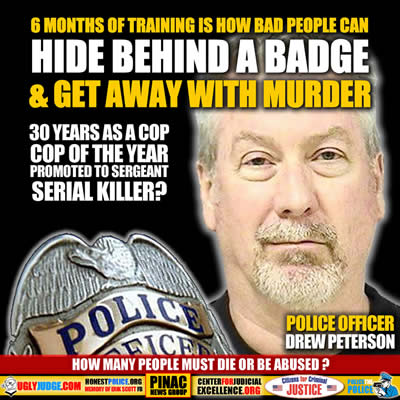 Drew Peterson Hid behind the Badge for 30 years. Having grown up with a sister who is a sociopath I’m very familiar with their traits and skills. The ability to be charming, convincing and cunning as just a few of the abilities they possess. The problem is when victims report their crimes and abuse Police often fail to act, fail to believe that someone in their role could commit crime, abuse or even murder. Thus scum of the earth people such as Drew Peterson find their way up the chain of authority. What’s worse is many sociopaths get into even higher authority roles. It’s just too easy to hide behind an image.

Police sergeant Drew Peterson was convicted in the 2004 murder of his third wife, Kathleen Savio. He was also named a suspect in 2007 in the disappearance of his fourth wife, Stacy Peterson.

Convicted killer Drew Peterson was born on January 5, 1954. After high school, he married and went into the U.S. Army. Drew Peterson went through several more marriages after joining the Bolingbrook Police Department in Illinois in 1977. He became a suspect in the 2007 disappearance of his fourth wife, Stacy Peterson, and was later convicted in the murder of his third wife, Kathleen Savio.

Drew Peterson served in the U.S. Army from 1972 to 1976, spending most of his time as a military police officer. While in the army, Drew Peterson married his high school sweetheart Carol. The couple had two sons together. He joined the Bolingbrook Police Department in 1977. Three years later, Carol and Drew Peterson divorced, amicably by all accounts.

Drew Peterson’s marriage to Connolly fell apart in 1992 over his infidelities. He was having an affair with Kathleen Savio, and he and Connolly divorced that year. Not long after the divorce, Savio and Drew Peterson married and eventually had two sons together, Thomas and Kristopher.

The union did not remain happy for long, however. Savio got an order of protection from Drew Peterson in 2002, claiming that he had physically abused her. The couple divorced in 2003, without finalizing their financial arrangements. That October, Drew Peterson married for the fourth time. He wed Stacy Cales, who was 30 years younger than him. Drew Peterson and Cales had been having an affair during his marriage to Savio.

Drew Peterson and Savio were set to resolve their outstanding issues regarding their divorce in April 2004. But Savio never made it to the hearing. She was found dead in her bathtub on March 1, 2004. Her hair was damp, but the bathtub was dry. At the time, Savio’s death was ruled an accidental drowning. Many of her family members, however, believed that Savio had been murdered. The full story

My point here is just how easy it is for sociopaths, bullies, losers, thugs and generally problematic people to get hired in roles of authority. Then how almost impossible it can be to expose them and get police of government to hold them liable or invesitgate them. In my case my sister was quick to perjure a document to be assigned conservator of our mother. Via lies, fraud, abuse and even crime, yet several judges ignored petitions and letters exposing her. Yet the nightmare continues and the abuse gets worse as well as the grand theft and embezzelment of our mothers estate.

I’m here to tell you there are more Drew Peterson’s many more but it’s rare they get removed.
Police, Lawyers and Civil Servants are among the highest positions and most infected. Guess who we rely on to prosecute them?
Guess why the people who should change the probelm don’t many are in fact sociopaths.
12 Million Americans Are Sociopaths
10 Careers With the Most Psychopaths
How to Spot a Sociopath (Hint: It Could Be You)
Little Do We Know: 5 Myths About Sociopathy, Debunked

VIDEOS
Married to a Murderer: The Drew Peterson Story

Monster in My Family 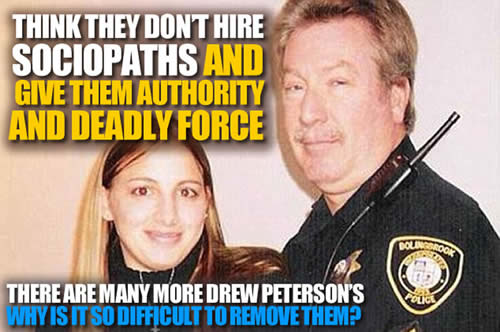