Home » State » Arizona » Worse than the Catholic Church hiding Molesters, America’s Most Dangerous cops Kill then move to other Departments

Worse than the Catholic Church hiding Molesters, America’s Most Dangerous cops Kill then move to other Departments 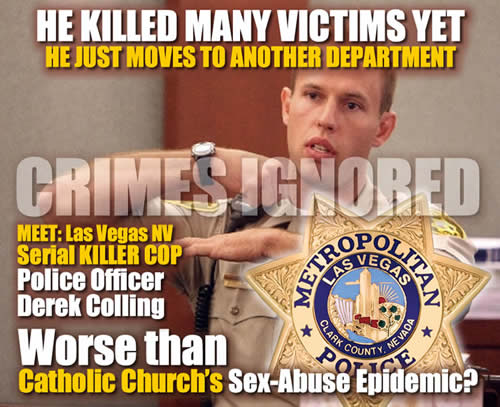 Las Vegas Nevada Police Officer Derek Colling is a perfect example of a broken system where Police Unions help problematice cops keep their jobs and stay employed in law enforcement so they can keep on killing. Officer Derek Colling ws fired yet able to get hired at another department and again murder an innocent person.

Derek Colling: “The Most Dangerous Cop in America” Identified as Shooter

The name of the deputy who killed Robbie Ramirez has not yet been publicly released. However, since the initial reports of that shooting Ramirez’ family has identified the deputy who killed him as former LVMPD Officer Derek Colling. No doubt that has not been confirmed by Albany County officials because Sheriff Dave O’Malley, who hired Colling even though he was fully aware of his previous firing, is currently running for reelection. With voters heading to the polls later today, reports that an unpopular hiring decision by O’Malley has resulted in a fatal shooting would be pretty inconvenient for him.

The family has further stated that Ramirez spent his entire life battling mental illness and this was well-known throughout the community. In fact, according to the family, Corporal Colling knew Ramirez personally, having graduated high school with him. As was previously stated by Randy Ramirez, his brother Robbie and Derek Colling even played baseball and sang on the school choir together during that time.

Therefore, he would undoubtedly be very much aware of Ramirez’ mental state and his tendency to run away from conflict. This obviously brings into question why other means of resolving the situation seemingly weren’t used prior to shooting him. Also, Robbie Ramirez’ own mother, Debbie Hinkel, frequently conducts training clinics for police officers as the chair of the Albany County Mental Health Board. She believes that Colling did not follow that training or properly attempt de-escalation tactics and has characterized the shooting as a murder.

Of course, those of us in Las Vegas that remember Derek Colling’s time as an officer with the Las Vegas Metropolitan Police Department likely not too surprised that none of those alternatives were employed. Even before he was fired for an incident in which he beat and falsely arrested a man who was legally filming him in public, Colling already had a long and violent history.

That history included two fatal shootings in 2006 and 2009. In the 2009 shooting of Tanner Chamberlain, Colling was the only officer to fire a shot and had arrived on the scene within only seconds of making that decision to shoot. Chamberlain, who was just 15 at the time, also had a history of mental illness and was having a manic-depressive episode, similar to Ramirez. Although he was holding a knife at the time and attempting to hold her in front of himself, Chamberlain’s mother has always stated that he would not have hurt her and instead was actually cowering behind her out of fear from the police.

Officer Derek Colling, who is the voice and title of the upcoming film “in a world of hurt”, has murdered again. This is the 3rd time he has murdered while being a police officer. He was fired from LVMPD for beating mitchell crooks while filming in his own driveway. Mitchell won a 100,000 dollar settlement. Colling was fired after a 9 month paid vacation costing taxpayers 108,000. Derek colling was hired by albany sheriff despite concerns raised by the victims of collings blue privilege of terror.

VIDEOS
LVMPD & Derek Colling Get Investigated by Department Of Justice

Officer Derek Colling the most dangerous cop in America