Those who do not learn history are doomed to repeat it 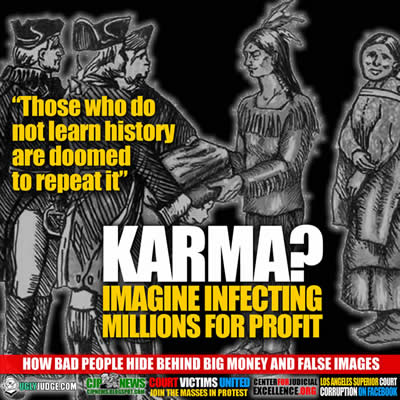 Imagine that, infecting a nation has been done before. Now the shoe is on the other foot. But do we just take it and relinquish power like native people were forced to? Maybe what’s infected America is deserved? Why was it OK back then and now America hides behind words? Words like Justice, Equality, Freedom, Legal, Law and Liberty.

I used to believe the propaganda and lies fed to use as children. Only to find it’s how a totally corrupt government gets us to pay taxes. The truth is America is one of the most corrupt countries in the world. Infected by greed and need to control.

Soon victims will outnumber the believers, the patriots who blindly protect a monster rising behind them will become victims.

The fact is there are two classes in America. One class forced to obey, pay taxes and be controlled by the other class. The other class is above the law and in fact creates law, abuses immunity and profits by abusing power and law.

Lets get back to the native people the REAL AMERICANS and how they were cheated and slaughtered and today no one wants to talk about it. Until History repeats itself and we’re supposed to feel sorry for all the people sick and dying?

The epidemic of 1837–38 also spawned a narrative of deliberate white genocide against the original Americans: “smallpox in the blankets”—white Europeans and white Americans deliberately promoting the spread of smallpox among unsuspecting American Indians to clear them off the land. Smallpox in the blankets is one of those stubborn legends that can’t be dismissed as myth because it is founded in a mixture of limited historical fact and widespread circumstantial evidence. Based on Raphael Lemkin’s definition of “genocide”— a term he coined in 1944 to describe what the Turks had done to the Armenians during World War I, the Soviets had done to the Ukrainians and upper-class Poles in the interwar period and what the Nazis were then doing to the Jews— the United States had practiced cultural genocide against American Indians since the 1870s, but had not practiced actual physical genocide. The sole documented instance of smallpox in the blankets was approved by an Englishman and instigated by a brace of Swiss mercenaries. White American settlers and soldiers had murdered large groups of Indians, including women and children, from the 17th century to the end of the 19th century with guns, poison and clubs.


Last Updated on 5 months by admin