The Fall of Authority 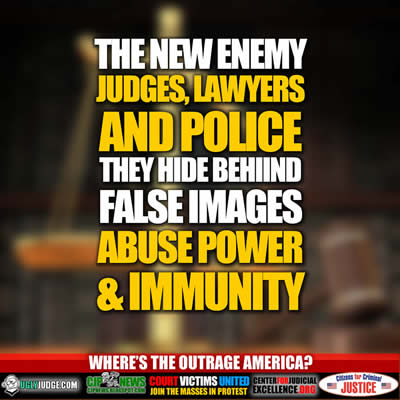 The fall of authority

If you’ve not been victimized yet it’s not if but when. Having been a Police officer for almost a decade I saw the problem from both sides when I became victimized by a corrupt judge and greedy lawyers who had no problem rigging justice. The fact is there are no talented lawyers just connected ones who have ins with the courts.

Perjury, fraud, filing false documents, elder abuse, ignoring law, probate code and even embezzlement of over $2 million dollars meant nothing and was ignored by the DOJ, FBI, Commission on Judicial performance or the legal Bar.

Even the police did not care when reported to the Elder Abuse department of LAPD. The fact is when a crime takes place within a court no one wants to get involved. They claim the court handles it’s own crimes and abuse. The problem is most judges don’t want to overturn or address what a corrupt dishonest judge has done before them. My full story

Once victimized I did what thousands of millions before me do. They look for other victims, share their stories on social media and try and get media attention to expose the predators. Problem is there’s and epidemic of judicial crime, abuse and fraud. Worse those involved have not fear of punishment because as public servants or members of the court they hide behind immunity.

Police and courts work as a biased family against the public. They act as the muscle for the courts who when threatened have police abuse, terrorize and even murder anyone who takes a stand. Police in turn are able to murder in cold blood innocent victims and escape punishment and accountability. Police unions, a fraudulent Police officers bill of rights which trumps the original bill of rights allows police to commit crimes, lie and perjure all in the name of fear or law.

It’s no longer a yearly event where police murder, abuse, rape or beat innocent victims it’s a daily event. With the advent of mobile phones audio and video evidence cannot be ignored. However trigger happy, cowardly cops who hide behind the word “FEAR”. Abuse it to the point that they get away with cold blooded murder when no actual danger exists. All this combined and the public has lost all respect for police and justice for that matter.

Anyone who has dealt with the Justice system learns quickly that it’s not about justice but who has more money. It’s about who can buy more justice.

It’s not just in Probate court as I learned it’s in all courts, Family, divorce, civil and criminal.

The armies of victims and families has grown to millions and grows each day and each time a cop, judge or lawyer is exposed for abuse, murder or prosecuting the innocent.

How many billions of dollars are stolen, embezzled or extorted? Thousands of people are executed every year by police who are never held accountable, at least not to the same standard as everyone else.

Getting a badge, robe or civil servant position has become a license to steal, rob, terrorize or murder. Having undeserved impunity gives them a sense of power as well as deadly force which they abuse on a daily basis, guns are pulled for any reason. Pets are assassinated for nothing more than approaching a cop yet Mail carriers deal with pets every day and never has a pet been shot.

“When convictions are clearly wrong, these prosecutors don’t just hinder justice—they actively work against it.” More

On daily basis it’s exposed that innocent people have been in prison for decades. Thank god for DNA and other tests which help set the innocent free. Worse the bad cops, lying prosecutors are never held accountable or prosecuted for their crimes. It’s always the same the tax payer is extorted for legal fees to defend these monsters and criminals, victims are paid via the deep pockets of the tax payer.

It’s time there was change, not next year, not the decade but NOW. Removing immunity when perjury, crime, abuse or anything else that violates justice or law. No more use of irrational fear or hiding behind law or a courtroom. Everything must be transparent; all hearings must be digitally recorded just like mandatory body cams on police. Record the judges and courts. No more statute of limitations because as we know criminals will stall and the courts will help them.

Worse when caught or exposed what do they do, lie, perjure and cover up their crimes?

Supporting News Stories
Why do prosecutors go after innocent people?
The County: the story of America’s deadliest police
Abusers use court system as a weapon
How Domestic Abusers Weaponize the Courts
How The Left Is Weaponizing The American Legal System
Abusers use court system as a weapon
Will Democrats Regret Weaponizing the Judiciary?
Abuse of Process – The Basics and Practicalities
Innocent But Still Guilty
The Innocence Deniers
Innocence be Damned: Prosecutors Who Disregard Justice in Push to Win at Any Cost
Why Prosecutors Might Succumb to Misconduct
Prosecutors Had the Wrong Man. They Prosecuted Him Anyway.
Why Does Our Justice System Fight So Hard to Keep Innocent People Behind Bars?