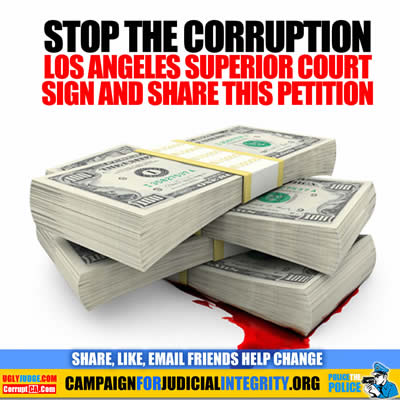 The Superior Court system in Los Angeles has become a joke for a city that has so much,yet so little,California is ranked F, at present and the Superior Court system here is next to third world as far as fraud,corruption,and justice for profit.This system is denying its residents/Taxpayers their due process on so many levels,Banks,Escrow companies and title companies own the courts and they are attempting to own the land.Lawyers wont take a stand against these courts and their judges thats how bad it has become.Please do the right thing and investigate and replace those who dont want to play fair.

California doesn’t quite have the reputation of Illinois or New York when it comes to public corruption. Same with the city of Los Angeles and its counterpart in Chicago. However, the City of Angels has a long history of public corruption itself. Many public officials stole from the people’s trough for their own enrichment. Here we take a look at some of the larger examples and their wider ripple effects on the city’s history.

LA Corruption is Not Just a Recent Phenomenon

The history of corruption in Southern California is well documented. The Cal Watchdog has a list of some of the more infamous cases.

One of the more recent examples is the 2016 resignation of South El Monte, Luis Aguinaga after taking bribes for seven years. Another LA Times expose found that in 2010 the city of Bell was run through some corrupt actions. Its former City Manager Robert Rizzo was found guilty of 69 corruption charges, and five city council members were also found guilty.

In the city of Carson Mayor Al Robles faced investigation over serving both as Mayor and a board member of the Water Replenishment District– as well as campaign finance questions for each.

In the city of Lynwood, two former City Council members, Louis Byrd and Fernando Pedroza were convicted of raising their pay by almost a combined half-million dollars. They took stipends for working on city commissions without any responsibilities. Reportedly, city officials also used city credit cards to pay for a night out to a Mexican strip club — including sexual favors. The Mayor Paul Richards II was slapped with a 16-year sentence for embezzlement in 2007.

Of course, there is the public corruption in the 1990s Rampart Scandal, which saw over 70 police officers implicated in corruption over the city’s Community Resources Against Street Hoodlums program. The police chief Bernard Parks was not hired back in 2001.

Foster Care Corruption in L.A., Children Given to Illegal Immigrants