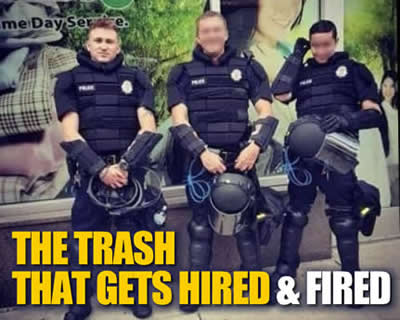 The Denver police department has fired an officer who posted a photo to Instagram with the caption “let’s start a riot.”

The now-deleted post showed officer Tommy McClay in riot gear alongside two other officers. McClay wrote “let’s start a riot” below the photo on a day when his colleagues used tear gas and foam bullets on protesters in the city.

The post quickly got the attention of the Denver Police Department, which put McClay on leave while it investigated the incident. A day later, the department announced that McClay had been terminated.

The two other officers in the photo “did not condone or allow that to happen,” the department found, so they will not be punished.

According to the Denver Post, McClay joined the Denver Police Department in October after graduating from the police academy. As a result, he “was within the nine-month probationary period all officers have after joining the department, which means he could be fired without all the processes that slow down internal investigations,” the Post reports.

The Denver Police Protective Association, which represents Denver cops, put out a statement supporting the move.

“Today a young, probationary Denver Police officer was terminated for posting an inflammatory, insensitive, and quite frankly, misguided photograph on social media,” the DPPA wrote. “For the other 1,600 Denver Police officers who are left dealing with a very difficult situation, we ask the public, as well as elected City officials, to stop using social media to fan the flames of hatred.”

Alex Burness, a Denver Post reporter who focuses on civil rights and criminal justice issues, writes that “when this kind of thing happens… Denver, more than almost any city in America, has a very high rate of rehiring cops who were fired.”