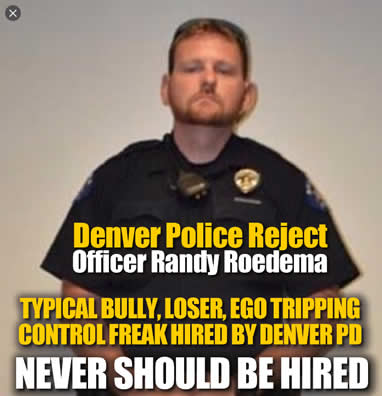 One of the problem officers who helped execute Elijah McClain

The problem is police departments all over America hire the worst candidates. Nothing to do with not having a record or even a good education. The problem is ego driven, losers, bullies and control freaks have no business with authority. People end up death or injured then unethical police unions help these criminals keep their jobs to go on with serial abuse and crime. You just don’t give a gun to a psychopath or child.

Officer Randy Roedema is a disgrace and black eye to every police officer in America. The tattoos the attitude and lack of respect is similar to Arizona Police reject Philip Mitch Brailsford

who was playing cops and robbers with his big gun and via the help of another moron Sargent who had no idea what he was doing played part in the execution of Daniel Shaver.

Three former Aurora police officers who, in January and February, appealed their terminations to the Aurora Civil Service Commission during private hearings, will not get their jobs back on the force according to a decision by the Commission.

Former officer Jason Rosenblatt was fired for his response to a photo text message sent by other former officers in which they appeared to mimic the police control technique used to subdue Elijah McClain during a 2019 police altercation prior to McClain’s death.

Rosenblatt responded to the text message with “haha.”

The chief fired him and two of the three officers who appeared in the photo: Erica Marrero and Kyle Dittrich.

Marrero and Dittrich appealed their terminations at the beginning of this month.

Problem Solvers: All 3 fired APD officers were at scene of Elijah McClain incapacitation

The third officer in the photograph, Jaron Jones, resigned in July.

At a minimum, he could have inquired as to who sent him the photo. Any of those responses required little thought or effort by Officer Rosenblatt and would have avoided adverse consequences for him. Instead, Officer Rosenblatt made the conscious decision to respond to the unknown sender in a manner that, if read by the public would portray Officer Rosenblatt, his fellow officers and the Aurora Police Department in a deplorable light,” they wrote.

The Commission produced a similar report in the cases of Marrero and Dittrich.

“Taking the photos, and then disseminating them to others with no control over who(sic) they might ultimately view them, while perhaps not malicious, demonstrated a severe lapse of judgment by Officers Marrero and Dittrich,” the Commission wrote.

“The revelation of their misconduct one month after George Floyd’s death resulted in catastrophic harm to the Department’s relationship with the community, not to mention harm to fellow officers and pain to the McClain family.”

A FOX31 investigation found Marrero and Dittrich were also at the scene of the August altercation, offering support to Rosenblatt and Nathan Woodyard, another officer who was involved in the August incident.