Mold can kill you Judges who put profit over your health

By admin Facebook, Government, How to Expose them, Judges, Lawyers, Links, Uncategorized, Victims, Who is UGLY, Who to Report them to 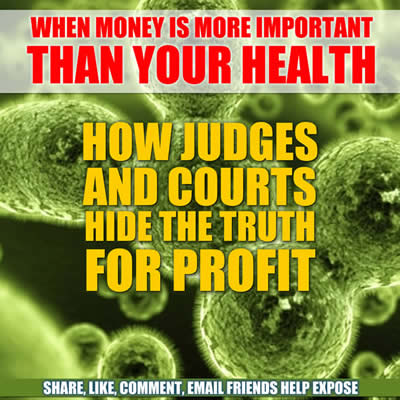 You’d be surprised what judges and lawyers would do for profit. Even if it means death? Find out more about how health risks are hidden or ignored by our courts by totally dishonest people who care only about profit.
Read the story about how California Judges put profit over YOUR health

Sharon authored a publication in 2005 regarding how a scientific fraud was mass marketed into US public health policy for the purpose of misleading U.S. courts to deny liability for causation of a specific environmental injury. I named those who I knew at the time were involved in the scam. I now know there are many more. In relevant part, my accurate writing states,

“Dr. Bruce Kelman of GlobalTox,Inc, a Washington based environmental risk management company, testified as an expert witness for the defense, as he does in mold cases throughout the country. Upon viewing documents presented by the Hayne’s attorney of Kelman’s prior testimony from a case in Arizona, Dr. Kelman altered his under oath statements on the witness stand. He admitted the ManhattanInstitute, a national political think-tank, paid GlobalTox $40,000 to write a position paper regarding the potential health risks of toxic mold exposure. Although much medical research finds otherwise, the controversial piece claims that it is not plausible the types of illnesses experienced by the Haynes family and reported by thousands from across the US, could be caused by “toxic mold” exposure in homes, schools or office building

In 2003, with the involvement of the US Chamber of Commerce and ex-developer, US Congressman Gary Miller (R-CA), the GlobalTox paper was disseminated to the real estate, mortgage and building industries’ associations. A version of the Manhattan Institute commissioned piece may also be found as a position statement on the website of a United States medical policy-writing body, the American College of Occupational and Environmental Medicine [ACOEM]”

Kelman and five additional owners of GlobalTox, now known as Veritox, sued me for libel in May 2005, in the San Diego Courts for the sentence, “Upon viewing documents presented by the Hayne’s attorney of Kelman’s prior testimony from a case in Arizona, Dr. Kelman altered his under oath statements on the witness stand.” Their claims was that it was a maliciously false accusation of perjury.

First officers of the San Diego Superior and Appellate Courts systematically fixed the SLAPP suit to the false finding of libel by making my writing appear to have made a false accusation that it did not make. I.e. that I accused Kelman of lying about being paid to author the ACOEM version.  Wrong.  I correctly exposed that he was paid by a think-tank to author the U.S. Chamber’s version.

See Justice Judith McConnell’s 2006 anti-SLAPP Opinion acknowledging that Kelman altered his under oath statements when faced with a prior testimony; while making it appear that I falsely accused Kelman of lying about being paid to author the ACOEM mold statement.  (the anti-SLAPP opinion is chalked full of mistatement of fact) Then see how they systematically fixed the case again in my 2010 Appellate Petition for Review – which of course, was denied.

Veritox are toxic tort expert defense witnesses for the U.S. Department of Justice.  They’ve been paid over $1,000,000.00 for their services to the federal government.

Many court documents were falsified along the way causing the jurists to be conspiring to defraud without subject matter jurisdiction, and thus having no immunity from prosecution for the criminal acts.

In 2008, Judge Lisa Schall and her clerk, Michael Garland, falsified the Judment document after trial, causing it to be void to be used for any purpose.  The local jurists, Kelman and his attorney, Keith Scheuer, continued to use Schall’s falsified legal document for five more years to harass me, while knowing it was fraudulent and void; and that they had no subject matter jurisdiction.

San Diego District Attorney Bonnie Dumanis has REPEATEDLY refused to prosecute the county’s judges, justices, Veritox or their attorney for falsifying court documents — as the falsified court documents have continued to be used to harass me in the San Diego Courts. See 2013 Notice to Justice McConnell, Justice Benke and DA Dumanis to “Stop harassing me, you have no jurisdiction”

In addition to fixing the SLAPP suit to the false finding of libel, officers of the San Diego courts REPEATEDLY concealed that Mr. Kelman committed perjury to manufacture an alleged malicious reason for my exposing his FRAUD.  A second suit was then filed in 2010 by Kelman and his attorney, Scheuer, to try to silence me of the fraud upon the local courts in the first suit, aiding the continuance of scientific fraud in courts, nationwide. DA Dumanis knows it, but REPEATEDLY refuses to prosecute to stop the public fleecing!