How Juries are Manipulated to Help Police get away with Murder

By Jose Hernandez California, Court, Facebook, Government, How to Expose them, Judges, Law Enforcement, Lawyers, Lawyers, Links, Police, Real Heroes, Uncategorized, Victims, Who is UGLY, Who to Report them to 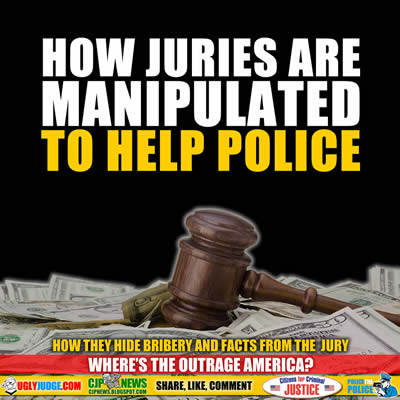 How Juries are Manipulated to Help Police get away with Murder? In fact this goes deeper how judges can make up their own laws and rules to make them immune if found to have accepted bribes.

Imagine you tax paid public servant is bribed with your tax dollars to rule against you in court?

What’s worse is what the California Legal Bar does to ANYONE WHO EXPOSES THEM, the disbar them. Sound familiar as this is what Law Enforcement does to anyone who exposes them. Good luck finding the so called “Good Cop” who has his life salary on the line.

If you’re amazed how a cop can shoot someone in the back, plant evidence and have it all caught on video only to be found “NOT GUILTY” then you’re not alone.

What the public needs to understand is how easy it is for a judge to manipulate a jury. Remember the judge decides what is admitted as evidence, even how a case can be. What the jury should look at and what they should ignore are all things judges influence.

Recently there was a case where a Los Angeles County Sheriff over-reacted and put a gun to an unarmed man’s head. It was all caught on video and audio with the exception of what took place after the man was removed from his vehicle.

Basically what happened to Ken Sheppard

How the officers made up their own story what took place, manipulated the scene and evidence as well as stopping the recording process to cover their actions. This is actually very common.

The victim  later filed a lawsuit against the county of Los Angeles and who do you think won? What more people need to be aware of is the fact it’s been proven that almost all Los Angeles county judges accept bribes from the county so they’ll rule in the counties favor. It’s so obvious and done with your tax dollars yet no one stops it.

The state even went to far as to make up a law which protects dishonest judges if they’re found to have committed crimes.

Now keep this in mind when watching the video done after the trial by Jasmyne Cannick. You’ll note the trial was manipulated by the judge so the jury had no choice.

This video is what initially happened to Ken Sheppard PART ONE

This is the COMPLETE Ken Sheppard video

Lawmakers seem indifferent to the system of corruption that has become a way of life in the state’s judicial system.

In January 2016 Dr. Richard Fine, Ph.D.; JD, was interviewed to learn about his efforts to expose the system of judicial bribery in California. In that article, I explained how Dr. Fine was caught up in a brutal battle of retaliation created against him by California judges, because he publicized unlawful payments given to those judges.

The payments were given by county governments to superior court judges who were employees of the State of California and receiving a full salary for their work. He was unlawfully jailed for 18 months under coercive confinement and had his law license revoked for speaking out against this corruption. Please read the previous article for the full details:

Unlawful Payments to Judges are Called Bribes
The unlawful system of “supplemental compensation” paid to California superior court judges began in the 1980s. Even though these payments have been declared illegal by the courts, county governments continue to make these payments to judges today.

In California, judges are paid a salary by the state government to provide impartial services. However, in approximately 30 of the 58 counties, the judges receive supplemental benefits in the form of annual payments from county government.

We are not talking about small amounts of money. In Los Angeles County, for example, annual payments to judges are in excess of $57,000 per year. [1] 90% of judges in California receive these supplemental payments. [2]

The official position taken by Los Angeles County is that these payments are part of an incentive program to attract highly qualified judges and to retain them in their positions. [3] The problem is that judges are elected and are not attracted or retained by these payments. Instead, the payments function as bribes for favorable court decisions benefiting the county governments that pay the money.

Counties Continued to Increase the Supplemental Payments to Judges

When the terms of all judges expired in January of 2013, the counties did not discontinue the payments and they did not keep them at 2008 levels. Instead, they continued to increase the payments.

The payments are once again illegal, because the counties overstepped their authority by increasing payments given to judges after 2009. Only the California legislature has the exclusive authority to adjust payments to its judges. When the legislature passed the 2009 law, they in effect set a new compensation level for judges that was to remain in effect until January 2013 and was not to be modified by the counties.

More News on this
Court clerk at center of massive bribery scheme forged records for drunk drivers and others, prosecutors say
Don’t think judges are the root of all the injustices taking place today? Think again about what goes on behind courtroom walls and why they don’t want you to know

What is SBX211 which was written behind the backs of everyone to help judges get away with crime “Yes to be ABOVE THE LAW”.
This bill would provide that no governmental entity, or officer or employee of a governmental entity, shall incur any liability or be subject to prosecution or disciplinary action because of benefits provided to a judge under the official action of a governmental entity prior to the effective date of this bill on the ground that those benefits were not authorized under law. Given to Judges for taking bribes. (SBX211)

SBX211 Retro Active Immunity given to California judges for openly taking bribes. Judges are employees of the State they receive their pay and benefits from the State. The Los Angeles Superior court judges are currently receiving an additional $57.688,00 from the county of Los Angeles. there is no bigger user of the court than L.A. County.(A party to the case and has a financial interest in most cases in the courts) Those payments were found to be unconstitutional / illegal in Sturgeon vs Los Angeles County. After that decision the judges paid a lobbyist to pass SBX211 ( RETRO ACTIVE IMMUNITY )

SBX211 does not restore due process
SBX211 violates Article 1 section 9
SBX211 violates the 14th amendment (no equal protections)
SBX211 violate checks and balances between legislative and Judicial powers.
Judges do not disclose the county payments at the onset of any trial where the county is either a party to the case or has a financial interest. (Judges violate Judicial codes of ethics)
Judges refuse to recuse themselves when requested under CCP170
Judges find themselves unbiased and then file an order striking statement.

Not only do judges get paid a state salary of $178,789.00 a year with medical and retirement benefits up to 75% of their salary, with the county payments the Los Angeles Superior court judges are the highest paid judges in the Nation. Los Angeles County takes tax payer money and then gives the judges that money to only have the judges rule against the tax payer in favor of L.A. County or the County’s interest. THE BRIBES WORK.

Why was an attorney locked in jail for over a year without any charges, was this extortion and what happened to that judge?

Just like law enforcement they never prosecute or investigate them because that would expose everything. So what they do is claim “We investigated ourselves however we can’t reveal what actions we took”. What happens is there is no investigation and instead that judge is allowed to retire with full benefits to go on working somewhere else. Judge David Yaffee Retires

Remember X LAPD officer Christopher Dorner, well you can imagine how angry he was when he did the right thing and took his case to court and lost. How can you lose? Dorner as many others find out the hard way the judges are bribed to rule in favor of the county. What did he do to get justice? Before you judge think about having your life destroyed, your made into a monster via lies and a corrupt system. You’re fired, yet you did the right thing and told the truth.