Home » State » Arizona » How to stop the Killing

How to stop the Killing 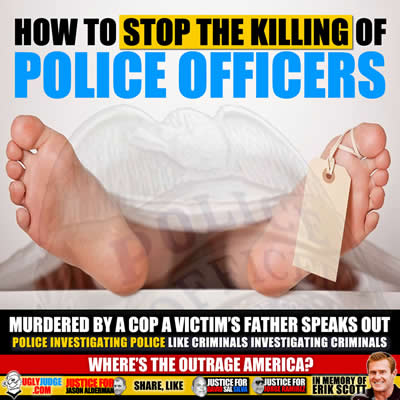 A MUST READ by a victim’s father William B. Scott

HOW TO STOP THE KILLING OF POLICE OFFICERS

On this, the sixth anniversary of my son, Erik’s, execution-by-cop, America is in serious danger of exploding into chaos.

The horrific murder of five Dallas police officers and the wounding of another seven this week triggered a profound sense ofdeja vu. Three years ago, I predicted this would happen, if cops continued to shoot and kill “civilians.”

From Chapter 10, pg. 181-182 of my novel, “The Permit”:
“…A spark like young Steele’s murder-by-cop, at precisely the right time and place, will blow Vegas to smither-frickin-reens. ….[H]ere’s the issue that makes this a national security concern… If all these factors come together under the right circumstance—something as abominable as Steele’s execution—all hell will break loose, and uncontrollable violence will spread across the country.  …We’d have a full-blown revolution on our hands. Whole cities would be torched, and we’d incur thousands of casualties. The stock market would crater, people would be afraid to go to work…. Hell, son, America as we know it wouldcease…to…be!”

We’re not there yet, but we’re close. The wild beasts born of cops killing, then lying and covering up their crimes, are on the loose and may not be tamed anytime soon.

I do NOT condone the targeting and killing of police officers! But I damn sure understand why it’s happening. As our nation mourns the five officers killed in Dallas, let’s not lose sight of the fact that cops are killing an average of 3.3 people per day, every day of the year—and getting away with it 99 percent of the time.

Since 1 May 2013, police officers have killed at least 3,702 people. As of yesterday, they’d killed 610 so far in 2016—and the total climbs every year (killedbypolice.net). Think about that: Those sworn to protect and serve Americans, the citizens who pay for cops’ salaries and benefits, have killed more of us in 3.5 years than al Qaeda terrorists murdered on 9/11.

Yes, the majority of police officers truly are good people, professionals dedicated to protecting and serving, and they’re rightly being hailed as heroes today. But good lawmen are being targeted and killed, because they’ve looked the other way, tolerating ruthless killer-cops in their midst. All in the name of a mindless, Mafia-like code of Blue Silence and illogical solidarity that infects every police department and law enforcement agency in the United States.

The blood of five police officers killed and seven wounded in Dallas last week, as well as that of many more who died over the past decade, is on the hands and souls of heartless killer-cops like William Mosher—who murdered my son in cold blood—Bryan Yant, Jesus Arevalo, Derek Colling, etc. And the gutless cops who panicked and killed Alton Sterling in Louisiana and Philando Castille in Minnesota last week must bear some responsibility for the tragic deaths of those five officers in Dallas. Whether cops, politicians and media pundits admit it or not, the murders of Sterling and Castille by badged executioners triggered Micah Johnson’s deranged killing spree in Dallas.

every uniformed police officer in America is in danger.

It’s time to stop the silly hand-wringing, kumbya calls for “calm” and “standing together,” and politicians mouthing pablum promises to DO SOMETHING, even if it’s ridiculously ineffective and unconstitutional. It’s time to implement real solutions, such as:

* True third-party investigations of every cop-caused fatality, ala the National Transportation Safety Board model (see “Law Enforcement is Fifty Years Behind Aviation“).

* A protocol similar to the Aviation Safety and Reporting System whereby good cops can anonymously report the misdeeds of their badged colleagues.

* Federal statutes requiring all law enforcement officers wear body cameras and carry (and pay for) personal liability insurance. Penalties for noncompliance include immediate dismissal. If a bodycam “fails” during a fatal encounter, or its video mysteriously disappears, the officer would be considered guilty of manslaughter, at the least, and subject to criminal charges.

* Zero tolerance for preemptively killing citizens “suspected” of being a threat, solely in the name of “officer safety.” Further, cops involved in cover-ups of an officer-involved shooting or other serious misdeed automatically would be dismissed, banned from the law enforcement field and subject to racketeering charges.

* Mandatory annual recertification of every law enforcement agent in the nation, to include psychological re-screening and several hours of education about the Constitution, particularly the Bill of Rights. As part of this yearly process, officers having multiple use-of-force complaints and/or a shooting on their records would be subject to dismissal in the name of public safety.

* A federally funded crash program to develop, test and field nonlethal means of subduing “suspects”. The program should focus on electromagnetic and/or electrostatic technologies that accurately deliver a nonlethal, disabling effect at some distance. I saw a prototype of such a system in a Huntsville, AL, lab 11 years ago. If a nonlethal weapon like that had been in Officer Bill Mosher’s hands on 10 July 2010, instead of a .45-caliber Glock 21 semiautomatic, my son would be alive today.

* Repeal of “Qualified Immunity” statutes that protect cops from prosecution. Although QI sounds reasonable, these well-intentioned laws have been severely perverted to the detriment of countless citizens who have been denied justice, after a cop kills. QI is literally a get-out-of-jail-free card foisted on American citizens by unprincipled police unions and politicians who failed to foresee its obscene unintended consequences.

These must be the absolute top priorities for politicos to tackle…IF they’re serious about ending the senseless killing of both citizens and police officers. God help us, if elected officials and law enforcement leaders decide to hunker down, ride out the current crisis, and kick the issue of dangerous killer-cops down the road…again.

My eldest son, Erik Scott, might be alive today if Las Vegas Metropolitan Police Department officers had been required to wear body cameras in the summer of 2010, when Erik was shot to death. Officer William Mosher—who panicked and shot my son as Erik and his girlfriend calmly walked out the door of a Costco—had already killed one man, in his first five years on the Metro force. Erik’s shooting was ruled “justified” because Costco security system video was destroyed via collaboration between local Costco personnel and Metro detectives. That evidence would have proven Erik was murdered in cold blood. With no video data, a coroner’s inquest jury had no alternative but to accept the blatantly false accounts of on-scene police officers.

The Erik Scott Case, Update 23: Video That Won’t Disappear
My Son Might Be Alive Today If Police Wore Body Cameras
Gunned Down in Vegas: What Really Happened to Erik Scott?
Vigil Honors Erik Scott, Raises Questions About his Death

As the police began to form a massive perimeter outside, Costco managers began evacuating the entire store without apparently explaining why to anyone. As Scott and his girlfriend exited the store he was identified to police officers, who were waiting with guns drawn outside the front door.

A blog from Erik’s family described what happened next:

Erik turned to find three officers facing him, guns drawn, and all three shouting different commands: “Get on the ground!” “Drop your weapon!” “Keep your hands up!” Erik held his hands up, spoke calmly, told them he DID have a concealed firearm and a legal CCW and was an ex-Army officer. His girlfriend was screaming about Erik being a West Point grad, former Army officer, etc. Erik leaned to his left, hands still up, to expose the pistol, and repeated, “I am disarming; I am disarming.” Witnesses say he started to lower his right hand, palm OUT, perhaps intending to remove holster and gun together — but never got the hand below his shoulder, when one of the cops (believed to be William Mosher, who had committed a fatal shooting in 2006) shot Erik in the chest with a .45-caliber semi-automatic weapon. Erik dropped to his knees, clearly in shock, his face a picture of disbelief. He was shot a second time and collapsed. The rest is ugly. The three officers unloaded again, firing a total of seven hollow-point rounds. At least four, possibly five, hit Erik in the back, after he was on the ground and dying.

Two experts hired by Scott’s family examined his body. They claim that of the seven .45 ACP hollowpoint bullets fired into Scott’s body, one was fired through his armpit, suggesting his arm was raised at the time. Four remaining shots were fired into his back. There were no exit wounds, making it all but impossible for police to claim that investigators misread through-and-through wounds.


Last Updated on 6 years by admin