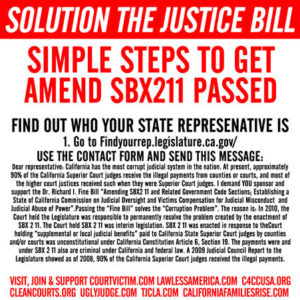 Elections are the best time to put the pressure on your state representatives and get them to help because they count on getting your votes.

1. Find out who your state representatives are.

Look for the screen below:

Enter your address. You should see a map where you reside and the Representatives for you area.
Use the “Contact form” on your reps website

“Dear representative: California has the most corrupt judicial system in the nation. At present, approximately 90% of the California Superior Court judges receive the illegal payments from counties or courts, and most of the higher court justices received such when they were Superior Court judges.
I demand YOU sponsor and support the Dr. Richard I. Fine Bill “Amending SBX2 11 and Related Government Code Sections; Establishing a State of California Commission on Judicial Oversight and Victims Compensation for Judicial Misconduct and Judicial Abuse of Power”. Passing the “Fine Bill” solves the “Corruption Problem”.
The reason is: In 2010, the Court held the Legislature was responsible to permanently resolve the problem created by the enactment of SBX 2 11. The Court held SBX 2 11was interim legislation. SBX 2 11 was enacted in response to the Court holding “supplemental or local judicial benefits” paid to California State Superior Court judges by counties and/or courts was unconstitutional under California Constitution Article 6, Section 19. The payments were and under SBX 2 11 also are criminal under California and federal law. A 2009 Judicial Council Report to the Legislature showed as of 2008, 90% of the California Superior Court judges received the illegal payments.”Amend SBX 211″ which a copy is located at: https://courtvictim.com/justicebill

GET PRIORITY AND TAKE ADVANTAGE OF THE BILL BY SHOWING YOU HELPED:
Take a photo or screen shot of your submission to your representative’s and keep it where you can refer to it at a later time.
The reason for this is the creators of the bill want to reward those who supported it and helped get it passed. Those victims will be allowed to file for restitution first and will need
to supply proof they’ve done so.

A copy of the Bill can be found HERE

More on the creator Richard I. Fine can be Googled or found HERE

1. Am I a candidate to get restitution via this Bill?
YES if you’ve been victimized by a California Judge.

2. Does this apply to victims going back how many years?

3. Besides restitution for my abuse what else does the Bill do to stop Judicial abuse?
Citizen’s oversight groups will be implemented where citizens are paid to sit on a board to govern the Justice system.

4. What will stop the deep corruption from using the court system once again to ignore the bill or change it once implemented?
The bill has set amounts for restitution which CAN NOT be changed by any court or judge

5. Who is Richard I. Fine?
Richard I. Fine is a patriot and retired lawyer who was disbarred for exposing (Dishonorable) Judge David Paul Yafee #29399 and the majority of Los Angeles County Superior court judges for accepting bribes from the county.

Last Updated on 1 month by admin