Home » Abusers » Conservatorship Guardianship » How to Bring Justice to Judges

How to Bring Justice to Judges

By Jose Hernandez Conservatorship Guardianship, Court, Facebook, How to Expose them, Judges, Lawyers, Lawyers, Victims, Who is UGLY 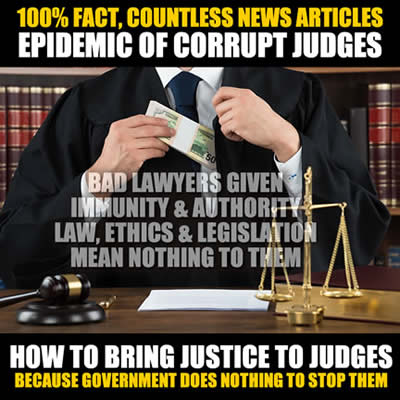 Teflon Robe: 5 takeaways from Reuters’ investigation of misconduct by U.S. judges
100% Proof that Judges are nothing more than dishonest lawyers who take advantage of authority and immunity for profit. If you can’t trust one of them we can’t trust any of them.

The proverb, “Absolute power corrupts absolutely” means that whenever a person has power over other people or things, it makes him/her corrupt. It morally destroys their nature and fills them with destructive pride. However, if the person saves himself from this abuse of power, he or she is a humble person.

Thousands of state and local judges across the United States were allowed to keep their positions on the bench after violating judicial ethics rules or breaking laws they pledged to uphold, a Reuters investigation found.

For its “Teflon Robe” project, Reuters reviewed 1,509 cases from the last dozen years – 2008 through 2019 – in which judges resigned, retired or were publicly disciplined following accusations of misconduct. In addition, reporters identified another 3,613 cases from 2008 through 2018 in which states disciplined wayward judges but kept hidden from the public key details of their offenses – including the identities of the judges themselves.

The Reuters report focuses on a longtime Alabama judge who once sentenced a single mother to 496 days behind bars over unpaid traffic tickets. That judge, Les Hayes, plans to resign this week, years after the judge admitted to failing to “respect and comply with the law.”

Since 2000, Hayes has served as a municipal judge in Montgomery. According to the state’s Judicial Inquiry Commission, Hayes broke state and federal laws by jailing hundreds of Montgomery residents, many of them Black, who were too poor to pay fines.

In 2016, Hayes admitted in court documents to violating 10 different parts of the state’s judicial conduct code. Despite his admission, Hayes reached a deal with the Alabama judicial commission to serve an 11-month unpaid suspension. He subsequently was rehired as a judge by the Montgomery City Council despite a community outcry.


Last Updated on 4 months by admin