Fraud Upon the Court 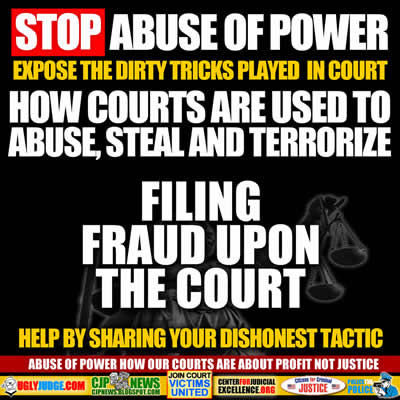 “Fraud upon the court” has been defined by the 7th Circuit Court of Appeals to “embrace that species of fraud which does, or attempts to, defile the court itself, or is a fraud perpetrated by officers of the court so that the judicial machinery can not perform in the usual manner its impartial task of adjudging cases .

When all the lawyers, investigators and judge are aware of crime, fraud, abuse and do nothing and then it continues and the guilty say “well the court approved it (because they did not act)”

A case or lawsuit; a legal and formal demand for enforcement of one’s rights against another party asserted in a court of justice. The term action includes all the proceedings attendant upon a legal demand, its adjudication, and its denial or its enforcement by a court.

A void judgment is a judgment, decree, or order entered by a court which lacks jurisdiction of the parties or of the subject matter, or which lacks the inherent power to make or enter the particular order involved, State ex rel.

Fraud upon the Court

Fraud Upon the Court is where the Judge (who is NOT the “Court”) does NOT support or uphold the Judicial Machinery of the Court. The Court is an unbiased, but methodical “creature” which is governed by the Rule of Law… that is, the Rules of Civil Procedure, the Rules of Criminal Procedure and the Rules of Evidence, all which is overseen by Constitutional law. The Court can ONLY be effective, fair and “just” if it is allowed to function as the laws proscribe. The sad fact is that in MOST Courts across the country, from Federal Courts down to local District courts, have judges who are violating their oath of office and are NOT properly following these rules, (as most attorney’s do NOT as well, and are usually grossly ignorant of the rules and both judges and attorneys are playing a revised legal game with their own created rules) and THIS is a Fraud upon the Court, immediately removing jurisdiction from that Court, and vitiates (makes ineffective – invalidates) every decision from that point on. Any judge who does such a thing is under mandatory, non-discretionary duty to recuse himself or herself from the case, and this rarely happens unless someone can force them to do so with the evidence of violations of procedure and threat of losing half their pensions for life which is what can take place. In any case, it is illegal, and EVERY case which has had fraud involved can be re-opened AT ANY TIME, because there is no statutes of limitations on fraud. This is a trillion dollar “justice industry” just waiting to be tapped.

“Fraud On The Court By An Officer Of The Court”
And “Disqualification Of Judges, State and Federal”

2. What is “fraud on the court”?
Whenever any officer of the court commits fraud during a proceeding in the court, he/she is engaged in “fraud upon the court.”In Bulloch v. United States, 763 F.2d 1115, 1121 (10th Cir. 1985), the court stated “Fraud upon the court is fraud which is directed to the judicial machinery itself and is not fraud between the parties or fraudulent documents, false statements or perjury. … It is where the court or a member is corrupted or influenced or influence is attempted or where the judge has not performed his judicial function — thus where the impartial functions of the court have been directly corrupted.”
“Fraud upon the court” has been defined by the 7th Circuit Court of Appeals to “embrace that species of fraud which does, or attempts to, defile the court itself, or is a fraud perpetrated by officers of the court so that the judicial machinery can not perform in the usual manner its impartial task of adjudging cases that are presented for adjudication.” Kenner v. C.I.R., 387 F.3d 689 (1968); 7 Moore’s Federal Practice, 2d ed., p. 512, ¶ 60.23. The 7th Circuit further stated “a decision produced by fraud upon the court is not in essence a decision at all, and never becomes final.”

4. What causes the “Disqualification of Judges?
Federal law requires the automatic disqualification of a Federal judge under certain circumstances.
In 1994, the U.S. Supreme Court held that “Disqualification is required if an objective observer would entertain reasonable questions about the judge’s impartiality. If a judge’s attitude or state of mind leads a detached observer to conclude that a fair and impartial hearing is unlikely, the judge must be disqualified.” [Emphasis added]. Liteky v. U.S., 114 S.Ct. 1147, 1162 (1994).
Courts have repeatedly held that positive proof of the partiality of a judge is not a requirement, only the appearance of partiality. Liljeberg v. Health Services Acquisition Corp., 486 U.S. 847, 108 S.Ct. 2194 (1988) (what matters is not the reality of bias or prejudice but its appearance); United States v. Balistrieri, 779 F.2d 1191 (7th Cir. 1985) (Section 455(a) “is directed against the appearance of partiality, whether or not the judge is actually biased.”) (“Section 455(a) of the Judicial Code, 28 U.S.C. §455(a), is not intended to protect litigants from actual bias in their judge but rather to promote public confidence in the impartiality of the judicial process.”).
That Court also stated that Section 455(a) “requires a judge to recuse himself in any proceeding in which her impartiality might reasonably be questioned.” Taylor v. O’Grady, 888 F.2d 1189 (7th Cir. 1989). In Pfizer Inc. v. Lord, 456 F.2d 532 (8th Cir. 1972), the Court stated that “It is important that the litigant not only actually receive justice, but that he believes that he has received justice.”
The Supreme Court has ruled and has reaffirmed the principle that “justice must satisfy the appearance of justice,”Levine v. United States, 362 U.S. 610, 80 S.Ct. 1038 (1960), citing Offutt v. United States, 348 U.S. 11, 14, 75 S.Ct. 11, 13 (1954). A judge receiving a bribe from an interested party over which he is presiding, does not give the appearance of justice.
“Recusal under Section 455 is self-executing; a party need not file affidavits in support of recusal and the judge is obligated to recuse herself sua sponte under the stated circumstances.” Taylor v. O’Grady, 888 F.2d 1189 (7th Cir. 1989).
Further, the judge has a legal duty to disqualify himself even if there is no motion asking for his disqualification. The Seventh Circuit Court of Appeals further stated that “We think that this language [455(a)] imposes a duty on the judge to act sua sponte, even if no motion or affidavit is filed.” Balistrieri, at 1202.
Judges do not have discretion not to disqualify themselves. By law, they are bound to follow the law. Should a judge not disqualify himself as required by law, then the judge has given another example of his “appearance of partiality” which, possibly, further disqualifies the judge. Should another judge not accept the disqualification of the judge, then the second judge has evidenced an “appearance of partiality” and has possibly disqualified himself/herself. None of the orders issued by any judge who has been disqualified by law would appear to be valid. It would appear that they are void as a matter of law, and are of no legal force or effect.
Should a judge not disqualify himself, then the judge is violation of the Due Process Clause of the U.S. Constitution. United States v. Sciuto, 521 F.2d 842, 845 (7th Cir. 1996) (“The right to a tribunal free from bias or prejudice is based, not on section 144, but on the Due Process Clause.”).
Should a judge issue any order after he has been disqualified by law, and if the party has been denied of any of his / her property, then the judge may have been engaged in the Federal Crime of “interference with interstate commerce.”The judge has acted in the judge’s personal capacity and not in the judge’s judicial capacity. It has been said that this judge, acting in this manner, has no more lawful authority than someone’s next-door neighbor (provided that he is not a judge). However some judges may not follow the law.
If you were a non-represented litigant, and should the court not follow the law as to non-represented litigants, then the judge has expressed an “appearance of partiality” and, under the law, it would seem that he/she has disqualified him/herself.
However, since not all judges keep up to date in the law, and since not all judges follow the law, it is possible that a judge may not know the ruling of the U.S. Supreme Court and the other courts on this subject. Notice that it states “disqualification is required” and that a judge “must be disqualified” under certain circumstances.
The Supreme Court has also held that if a judge wars against the Constitution, or if he acts without jurisdiction, he has engaged in treason to the Constitution. If a judge acts after he has been automatically disqualified by law, then he is acting without jurisdiction, and that suggest that he is then engaging in criminal acts of treason, and may be engaged in extortion and the interference with interstate commerce.
Courts have repeatedly ruled that judges have no immunity for their criminal acts. Since both treason and the interference with interstate commerce are criminal acts, no judge has immunity to engage in such acts.