By admin Government, How to Expose them, Judges, Law Enforcement, Lawyers, Who to Report them to 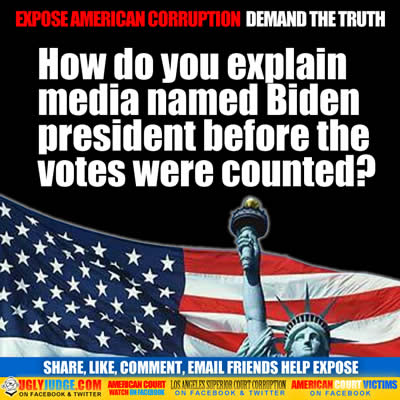 This is NOT about Trump or Biden so leave your political views at home. This is about the epic corruption and propaganda in America. Media is obviously tainted and used the common court and government tactic when honest, good people come forward with evidence, facts or witness to wrongs.

Victims of our corrupt courts, government agencies that refuse to investigate or question the courts and police who lack accountability or transparency know what’s really going on. Lawyers have infected America worse than any Pandemic which includes the current virus. They’ve rewritten law in their favor, weaponized the court system to profit from unethical legal fees and destroyed any faith in honorable judges in America today. If the common person can’t get justice in court and judges have become whores to bank loans which hide their unethical, immoral and dishonest acts America has failed us all.

Ask the victims of the courts if government works? Not the guilty or the frauds wearing robes of shame, shinny tin badges or with fancy government titles. Victims by the millions all experience the same outcome, DOJ, FBI and government in general ignores crime, abuse, fraud and perjury. If we can’t trust those we entrust with upholding the law how can we trust anyone who is elected president?

There are too many loose ends in this last election, media has outright lied too many times. Anything said by one side is always made into unproven fact while everything the other side states is made out at conspiracy theories, allegations or lies.

What is typical to victims and the innocent is the typical tactics such as “Don’t like the message, kill the messenger”. Character assassination is common and always used by police, courts, government and lawyers in general. Why do we allow hearsay over fact, evidence, witness statements, rights and law?

Too many people jump to conclusions and pay more attention to the slick lawyers babbling BS and obvious lies. No one prosecutes lawyers for perjury which they have given themselves immunity when they lie for money.

No one should be above the law but the truth is a great deal of people are in fact immune to law and above the law. As the say “Absolute power corrupts absolutely” No one, not congress, judges from the supreme court down should be above the law or have ANY immunity when exposed for criminal or unethical acts. No free tickets from jail for judges, police or government. Zero tolerance for perjury of any kind for all public servants. Remove lawyers from decisions because they’ve proven beyond a doubt they can’t be trusted. Give back power and ultimate decisions to the people and only the people.

Liberal Media Declares Joe Biden President-Elect Before All The Votes Are Even Counted
Yes, There Was Election Fraud. The Question Is How Much
Dominion Voting Systems Software Cast Doubt on Elections
US Vote Machines Made in Venezuela for Election Fraud
Online and vulnerable’: Experts find nearly three dozen U.S. voting systems connected to internet
Sidney Powell Makes Explosive Voter Fraud Allegation: ‘They Had This All Planned’