Home » Uncategorized » Exposing the Failure of the Authority Figure

Exposing the Failure of the Authority Figure 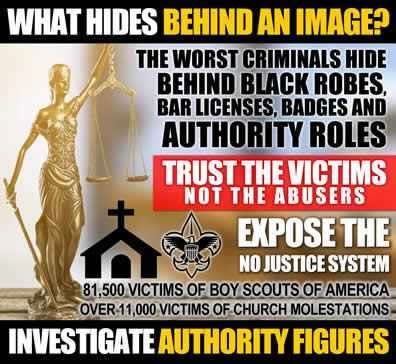 Exposing the Failure of the Authority Figure how judges, lawyers and police hide behind a fake image to commit their abuse and crimes

Sadly the authority figure has failed us and has been abused by the worst criminals, psychopaths, liars, con-artists and frauds. It’s been proven beyond a doubt by the epidemic of church molestation and Boy Scouts of America molestation cases which have occurred. What people need to be made aware of is how these abusers and enemies of society use an authority role as cover to commit abuse, crimes, fraud, embezzlement and murder.

It’s not just the church and Boy Scout of America but judges, lawyers, police and government roles that allow these monsters to get away with their crimes and abuse. The fact that like church molesters judge when exposed are never prosecuted instead they’re move from one court to another. Authority figures abuse immunity and the court system to escape prosecution and accountability.

We need to stop asking judges and police who fail everyone in getting justice or proper investigations against Boy Scouts of America or the Church. These authority figures refuse to prosecute each other because many of the police and judges involved are in fact “Doing the same within their roles”.
The problem with judges and police is worse as each entity supports each other with protections. The police won’t get involved in court matters and police won’t honestly investigate and prosecute judges. This unfair, unreasonable and distorted relationship breeds criminals, abuse and even legalized murder. Lawyers and the legal industry is a joke and nothing about justice, it’s 100% about money and how much you can afford. Lawyers are above the law and not held to the same standards of law as the public. Part of the problem is letting lawyers create laws and having the bar which is made up of lawyers oversee their own.

Same goes for police who we trust to investigate their own but know from video and audio evidence they’re incapable of doing so. Public servants of all kinds MUST be ruled over and governed by the public and no one who has anything to do with lawyers or police.

What the world needs to understand is the concept of hiding behind an authority figure image is not limited to the church or boy scouts of America. Victims are often ignored when a judge ignores law, crime, abuse and the victim’s rights. The problem is WHO DO YOU REPORT THEM TO? and worse who will without bias prosecute and hold accountable judges, lawyers, police and government. At the moment NO ONE so the concept of criminals hiding behind authority roles has been proven by what molesters from the church and boy scout leader have been getting away with for decades.

Ask the victims not the organization that has everything to lose that protects their own criminals and molesters. The system is broken and the government and organizations that should be protecting the innocent is part of the problem.

We need to stop believing the lies by the criminals involved which are constantly repeated until the public is brainwashed to think it’s the truth. While the victims have their characters destroyed by the criminals who are paid to play the game. Justice in our courts does nothing for the victims who come forward with evidence, fact and documentation of the abuse and crimes but are ignored.

Fifty-eight years ago, Edward Pittson says, the Scoutmaster who had taught him skills like how to use a compass and light a campfire said he was going to teach Pittson about sex. The Scoutmaster invited Pittson, who was 12, to his house and asked him to lie on the bed. The man assured the boy he had seen other Boy Scouts naked. “This is the normal way to learn about sex,” Pittson recalls the Scoutmaster telling him. “He said, ‘But don’t tell your parents what I’m doing. They wouldn’t think you’re mature enough. They wouldn’t understand.’” The man told him a “dirty story,” pulled down his pants and masturbated him. Pittson can’t remember if this happened one time, or if the Scoutmaster invited him over again a few weeks later, but he does remember pulling up his pants after a few minutes and walking out of the room. “He called after me, calling me a baby and trying to make me feel guilty,” Pittson recalls. “I just wanted to go home.”

About four years later, Pittson, around 16 and furious that the man remained a Scoutmaster, told his parents what had happened. He says his parents went to the bishop at their local church in Northern California, the same church that sponsored the Boy Scout troop, and the Scoutmaster was quietly removed from his position. Pittson says he also spoke to the bishop, but as far as he knows, nobody reported the Scoutmaster to the police. Now, Pittson is one of hundreds of men and boys hoping for a last chance at restitution if the Boy Scouts of America, in the face of a new wave of abuse allegations, files for bankruptcy.

High-profile cases and harrowing testimony given to public inquiries have continued to keep the issue in the headlines.

In the most recent of these, Cardinal George Pell was convicted of abusing two choir boys in Melbourne in 1996. He is Australia’s highest-ranking Catholic, and was previously Vatican treasurer – meaning he was widely seen as the Church’s third most powerful official.

And Theodore McCarrick, a former cardinal in the US, was defrocked over abuse claims just 10 days earlier – making him the most senior Catholic figure to be dismissed from the priesthood in modern times.

Meanwhile alleged cover-ups continue to dog the Church, and victims groups say the Vatican has not done nearly enough to right its wrongs. In an effort to address the problem, Pope Francis recently held an unprecedented summit on paedophilia in the Church.

Here’s what you need to know.

How did this all come to light?

Although some accusations date back to the 1950s, molestation by priests was first given significant media attention in the 1980s, in the US and Canada.

In the 1990s the issue began to grow, with stories emerging in Argentina, Australia and elsewhere. In 1995, the Archbishop of Vienna, Austria, stepped down amid sexual abuse allegations, rocking the Church there.

Also in that decade, revelations began of widespread historical abuse in Ireland. By the early 2000s, Church sexual abuse was a major global story.

In the US, determined reporting by the Boston Globe newspaper (as captured in the 2015 film Spotlight) exposed widespread abuse and how pedophile priests were moved around by Church leaders instead of being held accountable. It prompted people to come forward across the US and around the world.

A Church-commissioned report in 2004 said more than 4,000 US Roman Catholic priests had faced sexual abuse allegations in the last 50 years, in cases involving more than 10,000 children – mostly boys.

A 2009 report found that sexual and psychological abuse was “endemic” in Catholic-run industrial schools and orphanages in Ireland for most of the 20th Century.

A five-year Australian inquiry in 2017 found that “tens of thousands of children” were sexually abused in Australian institutions over decades, including churches, schools and sports clubs.

Think all judges and lawyers are honorable and law abiding?

An Arkansas judge who styled himself as a “Sugar Daddy” and was accused by local women of soliciting sex in exchange for cash, drugs and bail leniency largely escaped accountability from authorities for years, a Reuters investigation found.

On his final day in office, the judge was forced to resign from the bench in disgrace. But more than three years later, state officials have yet to decide whether he should be allowed to keep his law license. To date, he continues to practice law despite his misconduct on the bench.

The story of District Court Judge Tim Parker shows how hard it can be to remove an American judge suspected of corruption. It also illustrates how, even after misconduct on the bench becomes an open secret, a judge can remain in power for years when his victims are people who typically make for poor witnesses – in this case, petty criminals and drug addicts.

The Reuters investigation, Part 3 of the news agency’s series “The Teflon Robe,” is based on hundreds of pages of confidential sworn testimony, as well as interviews with the judge’s accusers and eight law enforcement officials in Arkansas.

Parker was investigated by the city police, the sheriff’s office, the state police, the Federal Bureau of Investigation and a federal grand jury over four years, but no charges were brought. Witnesses gave evidence that the judge disclosed the identity of a confidential informant; traded money and opioids for sex; and gave favorable treatment to young women in his courtroom, Reuters found.

As part of its “Teflon Robe” project, Reuters identified and reviewed 1,509 cases from the last dozen years – 2008 through 2019 – in which judges resigned, retired or were publicly disciplined following accusations of misconduct. In addition, the news agency’s investigation identified 3,613 cases from 2008 through 2018 in which states disciplined judges privately – withholding from the public details of their offenses, including the identities of the judges themselves.

Here are four key takeaways from Part 3 of the Reuters investigation, the first comprehensive accounting of judicial misconduct nationally:

* In many states, the lack of aggressive public oversight means that judges may behave with impunity. But a well-staffed and persistent state judicial oversight agency – the exception, not the rule, in the United States – can hold judges to account when other authorities can’t.

* In the unlikely case that judges are publicly charged with misconduct, many states enable judges to simply resign or retire, putting a stop to the charges and any investigation of potential wrongdoing. Reuters found that at least 341 judges across the United States escaped punishment or further investigation in the past dozen years by resigning or retiring amid misconduct allegations.

* By analyzing actions by state oversight commissions over more than a decade, Reuters found that states that deploy fewer resources tend to discipline fewer judges. Nationally, oversight agencies have on average one full-time employee for every 155 judges. Arkansas, which conducts relatively aggressive monitoring, has roughly one staffer for every 53 state judges.

* At least 5,206 people were directly affected by a judge’s misconduct, Reuters found. The victims ranged from people who were illegally jailed to those subjected to racist, sexist and other abusive comments from judges in ways that tainted the cases.

This secret system of resolving cases involving miscreant judges has parallels to how misbehavior by police is handled. “The public has been alerted as it never has been before to the way police misconduct is concealed,” said Stephen Gillers, a law professor at New York University. “The same is true for judges.”

To read this latest chapter of the investigation, click here

And to explore our interactive database and read official documents about judicial misconduct, click here

A study of judges’ unaccountability and consequent riskless wrongdoing; how to expose it and bring about judicial reform

Thousands of U.S. judges who broke laws or oaths remained on the bench
Holding judges accountable
Inside the Reuters year-long investigation into judicial misconduct across the U.S.
Teflon Robe: 4 takeaways from Reuters’ latest investigation of U.S. judicial misconduct
A proposal to extend Reuters’s investigation of state judges, which found “hardwired judicial corruption”, to federal judges, who have institutionalized their abuse of power as their modus operandi, running the Federal Judiciary as a racketeering enterprise

Janet Phelan on the crisis in judicial integrity

How Corrupt Is America’s Judicial System?

The Dark Truth About Boy Scouts

How Corrupt Is America’s Judicial System?