Home » State » Arizona » All Over America Proven Incidents of Lying Can’t Be Wrong, Do Cops Lie?

All Over America Proven Incidents of Lying Can’t Be Wrong, Do Cops Lie? 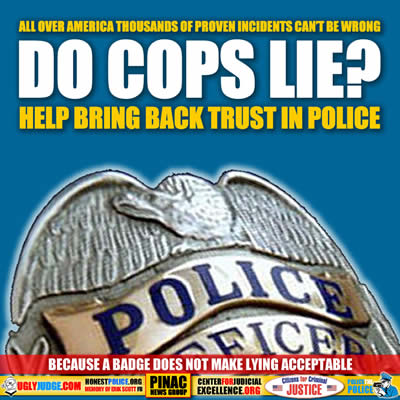 All Over America Proven Incidents of Lying Can’t Be Wrong, Do Cops Lie?
We’ve all seen it on TV or witnessed it the fact is “perjury” by public servants is out of control.

“Why do they do it? The main reason they do it, historically and now, is they can get away with it.”
“Cameras prove cops lie, and there are more cameras out in the world today than ever before.”

A cop’s word is often the difference between a person’s freedom and imprisonment. In many cases, an officer and a defendant tell diametrically opposed versions of the same incident — a “swearing contest,” lawyers call it — and a judge or jury is left to decide whom to believe: the professional law enforcement agent who has testified in dozens of trials or the undereducated, underemployed, probably black or Latino guy from an “area known for narcotics trafficking” accused of breaking the law? The scale is even more unbalanced when the word of the defendant is lined up against the words of not one but two, three, four, five professional law enforcement agents. “The words of the police officers would always prevail over the words of poor black and brown folks,” said Craig Futterman, a professor at the University of Chicago law school.

Police aren’t supposed to take sides in court, but of course they do. It serves their purpose to defend the legitimacy of the arrest and the evidence they gathered and handed to prosecutors. They do the investigative legwork for prosecutors and meet with them to discuss case strategy. It’s no surprise, then, that cops often emerge as the prosecution’s best witnesses, their experience on the stand contrasting with a defendant’s understandable nervousness, their veneer of neutrality hiding their personal belief in a defendant’s guilt.

“In criminal cases officers are given a higher degree of credibility,” said Tom Grover, a former Albuquerque Police Department sergeant who now works as a defense lawyer. “They are seen as having no stakes in the matter, of just doing their duty.”

Some jurors see right through this veneer. An officer’s usual aura of credibility doesn’t hold up as well in cities with large black and Latino communities filled with residents who have long distrusted police, said Futterman. Derwyn Bunton, chief public defender in New Orleans, can recount many occasions when, during jury selection, the judge would ask the roomful of prospects, “Who would you trust more: your neighbor or a police officer?” “Very often people chuckle out loud,” he said. “And this was before video evidence became as big as it is today.”

Definition of Perjury
:The voluntary violation of an oath or vow either by swearing to what is untrue or by omission to do what has been promised under oath :false swearing

Perjury is considered a serious offense as it can be used to usurp the power of the courts, resulting in miscarriages of justice. In the United States, for example, the general perjury statute under Federal law classifies perjury as a felony and provides for a prison sentence of up to five years. The California Penal Code allows for perjury to be a capital offense in cases causing wrongful execution. Perjury causing the wrongful execution of another is normally punishable by death in countries that retain the death penalty. Perjury is considered a felony in most U.S. states, as well as most Australian states.

Why is nothing done when public servants commit perjury via false statements or writing false police reports?

SOLUTION: All Tax paid public servants should be digitally recorded for their own protection and should be tax payer accessable in case any information or evidence comes into question. Millions will be saved in lawsuits, injustices, abuse of power and crimes by dishonest public servants.

How many events, murders and injustices need to take place before something is done? How many innocent people will suffer in prison or be sent to death row?

SUPPORTING NEWS STORIES
Judge Seeks to Examine Prevalence of Police Lying
Why Police Lie Under Oath
Blue Lies Matter
A new GOP bill would make it virtually impossible to sue the police
Caught on Tape, Caught in a Lie: 5 Times Video Proved Police Were Lying
Cop is caught ‘LYING’ about how he killed black musician whose car broke down
4 cops charged with lying under oath after video of drug bust shown in court
Police Officer Caught Lying About Fatally Shooting A Black Man In Florida
6 Investigates: Taft cop caught lying on camera
What is Police Misconduct?