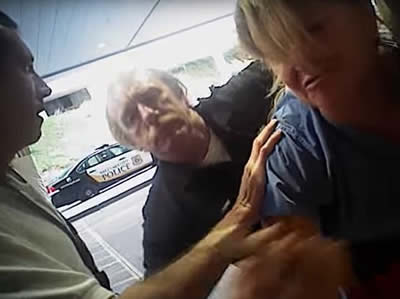 Salt Lake City Utah Detective Jeff Payne is a prime example of a sociopath, liar and fraud who gets hired by a major police department and then abuses his authority and the public. He should be sitting in prison (General population) to show all bad cops what happens when you commit perjury and overstep your duties as a “Public Servant”. That’s the key here, we are giving public SERVANTS far too much power over our lives. Dishonest judges all over America are using the term “Legal” only because they deem so that crimes are OK and acceptable.

A Utah police officer Jeff Payne whose rough arrest of a hospital nurse has drawn condemnation put the woman in handcuffs even after investigators told him not to worry about getting a blood sample he was seeking from a patient, the chief whose department asked for it said Friday.

Officer Jeff Payne initially wanted the sample as a routine part of a car crash investigation, said Logan Police Chief Gary Jensen. But after Salt Lake City Police detective Jeff Payne was told he’d need a warrant or formal consent to get it, colleagues told him that they would pursue another strategy.

“He simply said, ‘Don’t worry about it. We’ll go another way,” The illegal way.