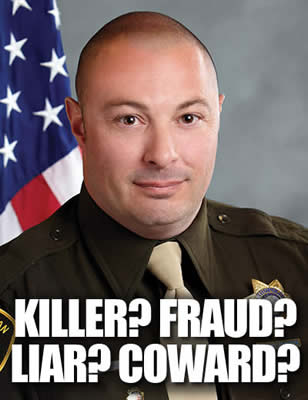 Officer Bryan Yant was the face of incompetence at the Metropolitan Police Department: a poster child for wrongful shooting deaths and million-dollar payouts, a driving force behind sweeping reforms to the agency’s deadly force policies.

In other cities, an officer who kills an unarmed man under suspicious circumstances and is accused of lying to cover his tracks might be prosecuted. In Las Vegas, Yant kept his job.

And he’s taken on a role that will make him more influential at Metro.

Officer Bryan Yant, in­famous for the 2010 killing of Trevon Cole, a small-time marijuana dealer, is doling out advice in his new job as a union director in the Las Vegas Police Protective Association.

Officer Bryan Yant, a 14-year veteran, has been in the position a few months and has already responded to “a few” police shootings, although Collins declined to say which ones.

“When he goes out in these situations he can tell somebody that it’s like biting a s—t sandwich. You’re not going to like it, but you’ll get through it,” Collins said.

He shot and murdered Richard Travis Brown after a foot pursuit in 2001. Two years later, he shot and wounded Melvin Gilchrist after mistaking a baseball bat for a gun. Both shootings had significant problems, with Officer Bryan Yant’s version of the events failing to match either evidence at the scene or witness testimony.

This is what they do to these dishonest killer cops, keep them employed and move them around. It’s a disgrace and damages the reputation of all cops everywhere. Bad people murdering innocent people then lying about it to cover get away with it. When exposed and proven nothing is done, they keep their benefits and go on helping other dishonest cops to get away with murder.