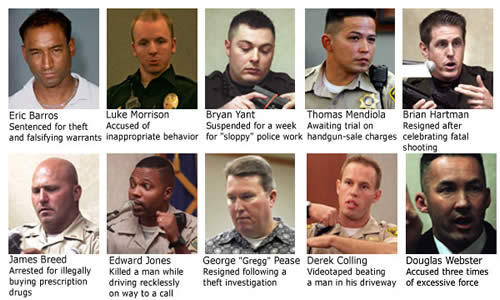 The charge cast further suspicion on what already was a controversial shooting. Mendiola, no longer a police officer, awaits trial.

As an officer involved in a shooting, he’s not unique in finding trouble.

A Review-Journal examination of all police shootings in Clark County since 1990 found that cops who use their guns sometimes show a pattern of questionable behavior beforehand or land in serious trouble after.

Their ranks include Metropolitan Police Department officer Derek Colling, who has shot and killed two people, and earlier this year was videotaped beating a man who was observing an unrelated arrest from his own driveway; officer Ronald Pearce, who shot and killed a man who attacked him in 1994, and later served a year in federal prison for counterfeiting; and officer Mark Mills, who wounded a man during a SWAT drug raid and was one of several cops in an off-duty 1997 brawl on the Strip that resulted in a $900,000 lawsuit settlement.

Involvement in an on-duty shooting isn’t necessarily a sign of a troubled officer. Sometimes shootings go with the job, and some of the department’s most respected officers have shot at people. Full Story