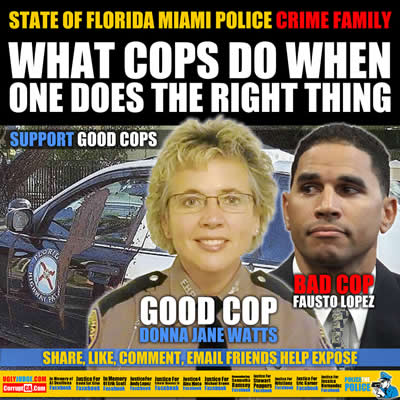 We often wonder why the good cops don’t do something about bad cops? Is it true that there are in fact more bad cops than good ones? Well this actual event of a good cop doing the right thing exposes the real problem we have today with paid authority figures. Even if they wear uniforms, have badges or swear to an oath the fact is many are nothing more than criminals, liars and frauds
who feel their above the law.

Miami police officer Fausto Lopez is accused of driving 120 mph on a turnpike because he was late for his off-duty job working security at a school.

The Florida Highway Patrol says officer Fausto Lopez was arrested at gunpoint after leading police on a brief high-speed chase.

According to a police report, a trooper spotted a patrol car changing lanes in a dangerous manner earlier this month. The report says the patrol car ignored warnings to pull over and led a brief high-speed chase before stopping near Hollywood.

A speeding Miami Police officer Fausto Lopez was fired Thursday almost a year after he was found driving more than 100 miles per hour.

Officer Fausto Lopez was caught by a Florida Highway Patrol trooper  Donna Jane Watts driving 120 miles per hour in October 2011. When he ignored  officer’s Donna Watts  instructions to pull over, a short high-speed chase ensued. He said he was late to an off-duty job working security at a school.

Officer Fausto Lopez was charged with reckless driving and sentenced to 100 hours of community service and suspended for a month.

The firing follows an investigation into the matter determining that Officer Fausto Lopez’s speeding was grounds for termination.

The investigation found that Fausto Lopez had a “practice and pattern” of speeding: FaustoLopez has reportedly driven more than 90 miles per hour on more than 80 occasions.

An investigation into speeding police officers in South Florida found that Fausto Lopez was the most frequent speeder. In his commute from Coconut Creek to Miami, he regularly drove more faster than 100 miles per hour and only slowed down to “near-legal limits” after the incident with FHP was covered by news.

It’s what happened AFTER it was proven Officer Fausto Lopez was guilty that bothers most people. Cops harassed the good cop not the bad one.

Florida Highway Patrol trooper Officer Donna Jane Watts was just doing her job when she pulled over a Miami police officer for topping speeds of 120 mph, but the fallout has been anything but routine: She’s now suing her colleagues for harassment.

According to the Florida-based Sun-Sentinel, Watts has filed a lawsuit against more than 100 police officers and agencies for illegally accessing her personal information and creating a “life-threatening situation.”

Watts claims the harassment by law enforcement began after she pulled over Miami officer Fausto Lopez in October 2011 for speeding in his patrol car. Traveling well over 100 mph, Lopez was reportedly weaving in and out of lanes so fast it took Watts seven minutes to pull him over even with her lights flashing and sirens blaring.