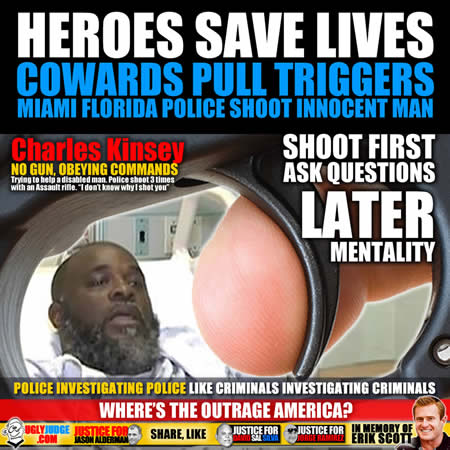 One of the reasons Americans no longer believe police is due to the outrageous lying that goes on. The fact is as soon as police commit crime, murder or shoot someone the propaganda, manipulation of the facts and outright lies begin. Many American’s trust an image of integrity and pride which no longer exists. The fact is this man did everything right, obeyed all the commands and broke no laws. Yet the police still managed to shoot (3) times at him. It’s no longer about “protecting and serving” the public instead it’s “Badges get away with murder and lying”.

We all know anyone else shooting at an unarmed person would be charged with discharing a weapon within city limits and attempted murder. The fact this problem officer who has obvious mental issues and never should have been hired will never any punishment. This is what angers the public. Police prove to us several times a day, everyday “They’re above the law”.

Now the cover up, lies by the police union to “Rationalize” attempted murder by people who are unfit to have deadly force. Then after a totally bad shooting they handcuff and abuse the man instead of getting him medical aide.

Minka Kelly questioned, “How is this still happening….?! These poorly trained officers are ruining the safety and trust for the rest of our officers.”

Poorly trained, totally stupid, like rabid dogs wanting only to shoot and kill or all of the above can be considered as reasons why this officer shot. The truth is usually in what the officer first states before he can make up lies and false accounts. The fact is the officer stated “I don’t know”.
NEWSTORIES
Charles Kinsey: 5 Fast Facts You Need to Know
Unarmed South Florida man with hands up shot by police while calming autistic patient
Florida man says his hands were up when police shot him
Black therapist shot by Florida police while helping autistic man
Celebrities React: Charles Kinsey, Unarmed Black Therapist Shot By Police
Florida man shot by police while assisting autistic man