By Jose Hernandez Arizona, Articles, Britney Spears, Conservatorship Guardianship, How to Expose them, Judges, Lawyers, Victims, Who to Report them to 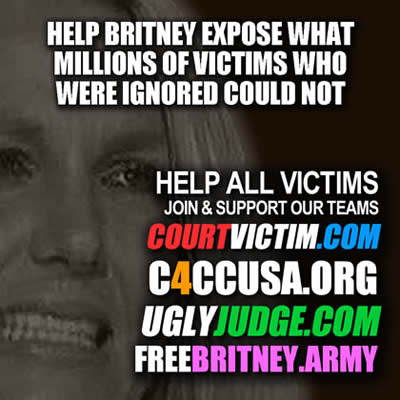 Want to be added to our presence and reader base please contact us using the contact forms on courtvictim.com

Britney Spears’ Conservatorship: What’s Going on and What’s Next?

The contentious fight over Britney Spears’ conservatorship entered a new phase after the singer’s scathing testimony in front of Los Angeles probate judge Brenda Penny in June, during which the pop star offered a harrowing account of the last 13 years of her life.

Since 2008, Spears’ life has been controlled by a conservatorship led by her once-estranged father, James “Jamie” Spears. The conservatorship has been credited by some with helping right Spears’ career after a tumultuous 2008 ended with a 5150 involuntary psychiatric hold; since then, Spears has put out hit albums, toured the world, and starred in a Las Vegas residency. But in her testimony, Spears claimed that her father and others enlisted to oversee her life and career have forced her to work ceaselessly; she even goes so far as to compare her seven-days-a-week, no-days-off schedule to sex trafficking. Spears, who also has a personal conservator, Jodi Montgomery, alleged that she was prescribed medication like lithium against her will and told she was not allowed to get married, have another child, or have her IUD removed.