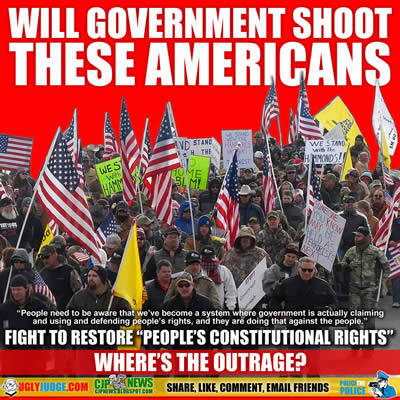 Funny how when people object to something all of a sudden their labeled “Anti-Government”.

“Mow them Down,” Americans Once Critical of Police Killings Now Beg Feds to “Slaughter” US Citizens

Find out how this all started: Read the following story first
Hammonds to serve 5 years in prison

“Today two Oregon ranchers were sentenced to five years in federal prison under terrorism statutes for setting preventative fires on their own land. We are gravely disappointed at this outcome.

“Elderly Harney County rancher Dwight Hammond and his son, Steven, a former OFB Board member and Harney County Farm Bureau president, have already served time in federal prison for their mistakes and paid their debt to society for the less-than-140 acres of BLM land that was accidentally impacted by the fires.

“This is an example of gross government overreach, and the public should be outraged.

“Today’s verdict is also hypocritical given BLM’s own harm to public and private grazing lands, which goes without consequence. It is unjust. OFB worked on this case quietly behind the scenes with BLM through the spring and summer. That diligent diplomatic effort was fruitless.

“This prosecution will have a chilling effect across the West among ranchers, foresters, and others who rely on federal allotments and permits. It will harm the positive relationship many ranchers and organizations have worked to forge with the BLM, and undermine the cooperative spirit most ranchers have brought to the bureau in helping the health of the range.

“Please join Farm Bureau and declare your support for Steve and Dwight Hammond. Join over 2,600 other citizens from across the country and show BLM that this extreme abuse of power will not go unnoticed and is shameful. Sign the petition at www.savethehammonds.com. This must never happen again.

According to the Washington Standard, the problem is multifaceted.

First, both men were sentenced in 2012 by now-retired U.S. District Judge Michael Hogan, following the trial. Steven received one year and a day in prison for setting fires in 2001 and 2006. Dwight got 3 months for his 2001 involvement. Hogan did not believe the men had malicious intent to be labeled as terrorists under the Anti-terrorism and Effective Death Penalty Act of 1996, even though he sentenced them to jail for the time he did.

The men agreed to a plea deal that they would not appeal the 2012 sentence in order to bring the case to a close.

Both men served their sentences and were released. Now, the feds have appealed those sentences and want the mandatory minimum five-year sentence imposed on the men, and so they appealed to the 9th U.S. Circuit Court of Appeals, who agreed with the feds that the judge ruled illegally. However, now they are wanting to label the Hammonds as terrorists under the 1996 law in order to put them back in jail.

Aside from being thrown in jail for a second time, the Hammonds are upset because they allege no crime was ever committed.

“They called and got permission to light the fire… We usually called the inter-agency fire outfit – a main dispatch – to be sure someone wasn’t in the way or that weather wouldn’t be a problem,” said Dwight’s wife Susan.

Federal officials said Sunday that they were monitoring the armed takeover of a remote federal wildlife refuge in the rural southeastern corner of Oregon. The occupation, which began Saturday afternoon, appeared to be led by Ammon Bundy, a rancher whose family became a symbol of anti-government sentiment in 2014, when his father inspired a standoff between local armed anti-government groups and federal officials seeking to confiscate cattle grazing illegally on federal land.

The building seized Saturday afternoon houses the offices of the Malheur National Wildlife Refuge, and is operated by the U.S. Fish and Wildlife Service, about 30 miles southeast of Burns, in Harney County. Over the weekend, the group lit a bonfire by the refuge’s stone headquarters building and draped an American flag over a sign.

The wildlife agency said no federal wildlife employees were in danger in the occupation. “While the situation is ongoing, the main concern is employee safety and we can confirm that no federal staff were in the building at the time of the initial incident,” a Fish and Wildlife Service press officer said.

In a statement captured on video, Bundy said that his group was “prepared to be out here for as long as need be” and would only leave once the people of Harney County “can use these lands as free men.”

Armed anti-government protesters have taken over a building in a federal wildlife refuge in Oregon, accusing officials of unfairly punishing ranchers who refused to sell their land.

One of them is Ammon Bundy, the 40-year-old son of Nevada rancher Cliven Bundy, who is well-known for anti-government action.

He spoke by phone to CNN Sunday morning. Asked several times what he and those with him want, he answered in vague terms, saying that they want the federal government to restore the “people’s constitutional rights.”

“People need to be aware that we’ve become a system where government is actually claiming and using and defending people’s rights, and they are doing that against the people.”

Armed group’s leader in federal building: ‘We will be here as long as it takes’
Armed, American protesters take over building in federal wildlife refuge in Oregon
Militiamen vow to hold federal wildlife office in Oregon ‘for years’
An Armed Militia Has Taken Control Of A Federal Building In Oregon

‘We are not terrorists’

After the march Saturday, the armed protesters broke into the refuge’s unoccupied building and refused to leave. Officials have said there are no government employees in the building.

“We will be here as long as it takes,” Bundy said. “We have no intentions of using force upon anyone, (but) if force is used against us, we would defend ourselves.”

Ammon Bundy said that the group in Oregon was armed, but that he would not describe it as a militia. He declined to say how many people were with him, telling CNN on Sunday that giving that information might jeopardize “operational security.”

The elder Bundy drew national attention last year after staging a standoff with federal authorities over a Bureau of Land Management dispute.

“We are not terrorists,” Ammon Bundy said. “We are concerned citizens and realize we have to act if we want to pass along anything to our children.”

He wouldn’t call his group a militia, but others are.

“I don’t like the militia’s methods,” local resident Monica McCannon told KTVZ. “They had their rally. Now it’s time for them to go home. People are afraid of them.”

A U.S. Fish and Wildlife Service representative said the agency and the Bureau of Land Management are aware of the armed protesters.

“While the situation is ongoing, the main concern is employee safety, and we can confirm that no federal staff were in the building at the time of the initial incident,” the representative said. “We will continue to monitor the situation.”

Get your info directly from the Ammon Bundy YouTube Channel HERE