Abuse of Power is what killed Sandra Bland 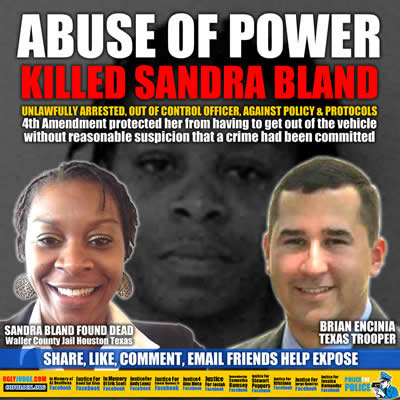 Abuse of Power is what killed Sandra Bland
Texas State Trooper Brain Encinia abused his power as a police officer which resulted with the death of Sandra Bland. There was absolutely no reason for Bland to be forced out of her vehicle. Jailed and treated the way she was. This was not a felony stop, no major crime had been committed and experts have already stated the officer was out of control and not following policy.

Trooper Brian Encinia claims Bland was combative and demanded she stop recording the arrest, but laws state that it is legal to record police if it doesn’t interfere with their duties.

1. Brian Encinia’s Is A Fairly New State Trooper
Encinia has no to very little experience and background as a peace officer.
2. Preliminary Investigation Revealed Encinia Violated Protocols and Policy
Texas Department of Public Safety officials informed reporters this week that Encinia violated traffic stop and courtesy protocols.  Legal experts claim his alleged abrasive behavior to be a factor. Bland’s rights were violated during the arrest. Citizens are allowed to remain silent after handing over their license and proof of insurance.
3. Key Details About His Encounter With Sandra Bland Were Left Out of his Report.

4. Trooper Brian Encinia’s Digital Presence Has Vanished
Typical of someone guilty and trying to hide
5. Lawmakers Side With Sandra Bland Over her Arrest
Texas Government states Trooper Brian Encinia did not display proper conduct. “Regardless of the situation, the state trooper has an obligation to exhibit professionalism and be courteous,” said Director Steve McCraw. “That did not happen in this situation.”
When asked by reporters if Sandra Bland caused her own death, West said “no.” He also added that she didn’t deserve to be arrested in the first place.
6. Trooper Brian Encinia Is On Administrative Leave
Trooper Brian Encinia is on administrative duty until the investigation is complete. The FBI is working with the Texas Rangers on the case after it was labeled Bland’s death was a suicide. Her family has hired an independent medical examiner an autopsy is scheduled to be released in the next few days.

The Death of Sandra Bland: What We Know So Far