Ten years ago on Sunday, 23-year-old, David Viera, was fatally gunned down by two police officers in the city of El Monte, California.

On July 20th of 2004, David Viera and a friend were pulled over around the “Five Points” region, near the Valley Blvd and Garvey Ave intersection. According to El Monte Police, Viera was pulled over for “fitting the description” of “suspects in a gang shooting.” Officials claim one of the men “refused to cooperate” and “reached under the seat,” prompting officers to open fire.

David Viera’s family, however, described being constantly harassed by El Monte police prior to the shooting. They stated that officers Ralph Batres and Santos Hernandez unjustly “riddled the car with bullets.”

No weapons were ever recovered from the vehicle and both David Viera and his friend were later exonerated as suspects from the “related” case. 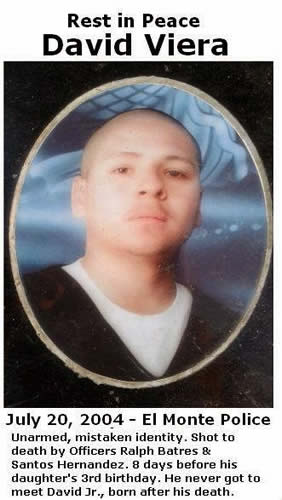