Home » Court » They Hide Behind Positions of Power and Authority

They Hide Behind Positions of Power and Authority

By admin Court, Government, How to Expose them, Judges, Law Enforcement, Police, Real Heroes, Victims, Who is UGLY, Who to Report them to 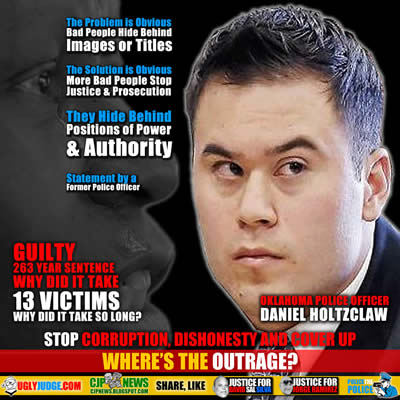 They Hide Behind Positions of Power and Authority. Those who should be prosecuting rarely do what is right.

Far too many people are abused, victimized and murdered by Bad People who hide behind an image or title. The problem becomes worse when we don’t address the problem of removing them ASAP. They destroy the reputation of all involved when the system has no option for simple removal. They have too many rights, too much immunity and as a result millions are victimized. It’s a problem those in power don’t want to address because they are just as guilty. Mayors who really never should have been put in power, judges who have no business on a bench and police officers who go on and on killing, abusing and committing crime.

Daniel Holtzclaw is just one example of thousands of cases which are finally being made public due to social media. Most are ignored and  hidden from public view. Locked deep within court room walls, silenced by ridiculous gag orders and legal games by clever judges and laws who use law for their own personal gain.

Daniel Holtzclaw is a very rare and unique case where eventually something was done. Far too late, far too many victims and after the fact.

Fact is Bad People get hired everyday, they’re protected, made immune, lied about, rewarded for bad behavior and promoted. In no other business do we allow the same practices of injustice. The problem and solution is obvious, but those who should act don’t. Why, why do those same people we entrust to prosecute, imprison some for far lessor crimes for decades yet those with images and titles get probation and a slap on the wrist. Worse many are allowed to retain all benefits and pay by retiring or resigning.

Just look into judges in California who’ve been found guilty of crimes and abuse and never get prosecuted. Not one, not even one gets the same punishment as everyone else.

Good Cops know what’s going on in America, the problem is they know those in charge won’t support them. Their lives, families and future is held hostage by a system that backs wrong, not justice or law.

IF IT WERE NOT FOR VIDEO AND AUDIO EVIDENCE THESE EVENTS WOULD HAVE BEEN IGNORED
Images and Titles should NOT be allowed to abuse, commit crimes or murder


Last Updated on 6 years by admin