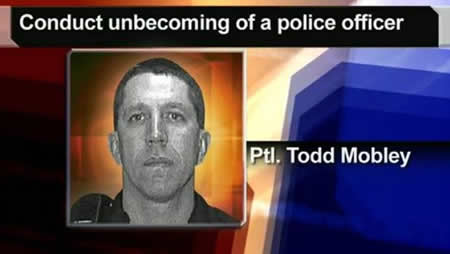 The 21-page investigative report that was conducted by Internal Affairs found Ocfficer Todd Mobley in violation of numerous departmental policies. He was cite for improper use of force, unlawful search and seizure, detention, failing to control his temper as well as misuse of police cruiser dash camera.

Cop Will Keep His Job Even Though He Switched Off Traffic Cam To Threaten Couple
Niles cop back on the job; report found he threatened couple
Cop who switched off traffic cam in order to make illegal threats will keep his job

Officer Todd Mobley, of the Niles, Ohio Police Department, is back on the job, with no criminal charges, after an internal investigation concluded that he illegally used his position to threaten a family, and that he turned off his dash cam in order to avoid having his actions recorded,

On November 25, 2014, the Ohio cop followed Lindsay Mulhull and her boyfriend, Tom Huffman, to her home, according to her complaint. There, he accused Huffman of stealing a gas can from his (Mobley’s) mother’s house.

“He tells me to get my kids back. I turn my back and that is when he pushes Tommy up against the cop car by his shirt and presses up against his neck and says ‘you’re dead if I ever catch you around my mother’s house again. I will kill you.’ And he just keeps repeating ‘You’re dead. You’re dead.’”

During the incident, another Niles police officer — unidentified, as of this post — arrived on the scene. Mobley then instructed that officer to turn off his own dash cam, claiming that it was necessary for a legitimate law enforcement purpose, even though, actually, it was to prevent his own actions from being recorded.

Ms. Mulhull reported the incident to the Niles Police Department’s Internal Affairs unit, who investigated her complaint. On Thursday, they issued a 21-page report, indicating that the Ohio cop did, in fact, violate several department policies.