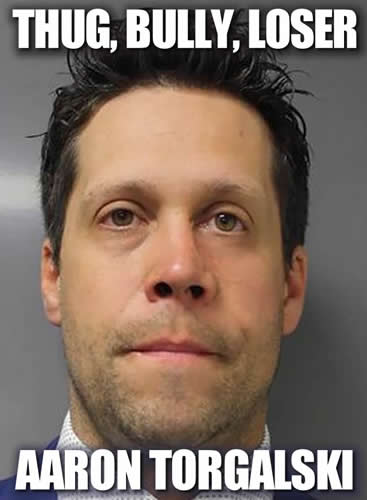 “Police officers cannot continue to hide behind the lie that they are protecting and serving.

A disgusting example of how they hire thugs, losers, bullies and control freaks. This monster abused a 75 year old man and did not have the courage to help the victim even when he knew he did wrong. Worse his entire team resigned from the unit being they’re all cowards.

About 650,000 people and counting have signed a petition demanding the Buffalo Police Department fire officer Aaron Torgalski, who was recorded on video last week shoving an elderly man to the ground as he attempted to hand back a helmet.

The petition is one focal point of efforts from anti-police brutality protesters around the country who are responding to the mass resignation of 57 officers from the city’s Emergency Response Team in solidarity with officers Torgalski and Robert McCabe. The two were each charged with one count of second-degree assault and both have pleaded not guilty despite the video recorded by a local WBFO-TV reporter. All 57 members of the unit resigned after the two men were suspended without pay.

Looking to push back on their efforts and to support the charges against Torgalski and McCabe, a man named Taylor Marquis started the Change.org petition hoping to ensure at least Torgalski is permanently removed from his position on the police force.

Two days after their push of a demonstrator drew nationwide attention — and condemnation — two Buffalo police officers were arraigned in Buffalo City Court on charges of second degree assault. A large crowd of fellow law enforcement officers made a show of support, congregating in front of the downtown courthouse and, in some instances, attempting to obscure the view of videographers shooting the scene.

Officers Robert McCabe, 32, and Aaron Torgalski, 39, members of the police department’s Emergency Response Team until all 57 members resigned from the assignment Friday, were charged in a virtual arraignment and released on their own recognizance. They plead not guilty to class D felony charges that are punishable by up to seven years in prison. Torgalski and McCabe are scheduled to return to court July 20.

“I’m not apologizing for charging them with a felony,” said John Flynn, Erie County District Attorney. “The facts are there, the charge is there and that’s what they’re faced with.”

The charge rises to a felony due to a law on New York’s books which protect people above 65 from elder abuse. It’s the same law that actually results in an assault on a police officer, firefighter or EMT to be a felony, as well.

A LinkedIn profile listing Torgalski as a Buffalo Police officer has since been deleted in the wake of the footage going viral.

There have been huge calls for Torgalski and the second officer to be fired from their jobs for pushing the elderly man, including from celebrities such as comedian Jim Gaffigan and singer Kacey Musgraves.

An online petition urging the officer be fired has since attracted more than 100,000 signatures.

“Torgalski was clearly abusing his power as a police officer for NO REASON,” the change.org petition states.

“The push was strong enough to make the old man fall backwards and crack his head and start bleeding. Aaron Torgalski should not be in control of our safety! This man does not deserve a badge! This man should not be allowed to hold a gun and carry out the law.”

Torgalski is reported to have been earning an annual salary of more than $80,000 at the department.

According to WBFO, Torgalski was one of 19 new recruits to have been sworn to begin their police academy training in August 2014.

He added: “While it is early, thankfully he is expected to recover. Simply put, the officers must be held responsible for their actions, not just fired.”

Police Assault Elderly Man, Then Walk Over Him As He Bleeds From Head Wound