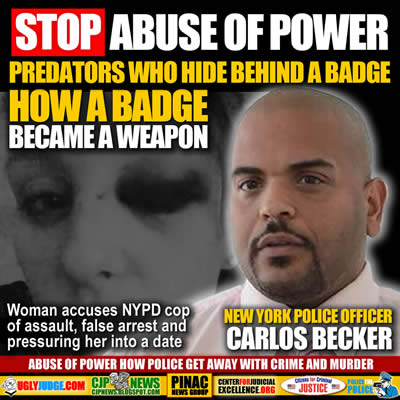 “I agreed with others to file a false insurance claim,” said Officer Carlos Becker, 40, a 13-year NYPD veteran who was terminated from his job last month. “… I knew it was wrong.”

The Bronx woman wooed by a hot-to-trot NYPD highway cop during and after her drunk-driving arrest sued the officer and the city Thursday for $150 million.

Erica Noonan, 31, says Police Officer Carlos Becker pulled her over on Fordham Road on March 11, 2013, because he found her attractive, videotaped her rear end with his cell phone while she was handcuffed at a police precinct and then pressured her into a date by promising to clear up her case.

“I’m going to talk to the district att on Monday,” Becker, 31, wrote in one of hundreds of text messages he sent her, according to the Manhattan Federal Court lawsuit. “Let’s just hang. I gotta get u in a better mood.”

During the March 24 date, Becker ordered Noonan a drink that made her feel groggy, she says. She woke up in the officer’s bed the next morning with a black eye and almost no memory of the night, according to her lawsuit. Becker, the woman says, told her she had injured herself. FULL STORY HERE