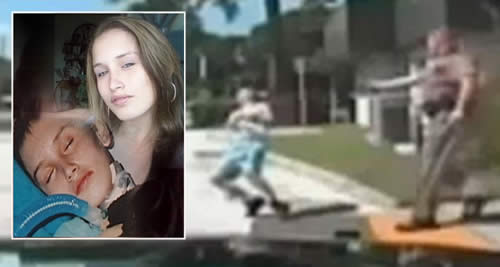 The People no longer trust him!

“It just doesn’t make any sense,” said Greg Connor, a professor at the University of Illinois Police Training Institute who specializes in use of force. “I don’t see where it’s going to be that hard to apprehend her.”

20-year-old Danielle Maudsley may never wake up again. Danielle was left brain dead after she was tasered by police which caused her head to hit the ground.

Maudsley was taken to a Florida Highway Patrol Station after being arrested for a suspected hit-and-run in September. While she was handcuffed, she ran out of the door, spun, fell backwards and hit her head on the ground.

Bleeding and crying, she tried to get up. She then blacked out and has remained unconscious ever since.

But as footage from a police cruiser dashboard camera reveals, Trooper Daniel Cole, who this week was cleared of any wrongdoing, fired a taser’s electric probes into her back.

Doctors say Danielle will most likely never wake up. Her mother, Cheryl has been critical of the Department of Highway Safety and Motor Vehicles and Florida Department of Law Enforcement stating  she was suing FHP.

What In The?!? Cop Tasers Woman, Leaving her Brain Dead
Experts say trooper’s use of Taser on woman raises questions

This officer has a history of problems

Should Trooper Daniel Cole have a job after shooting two innocent men and tazing an unarmed woman?

Long Version of the incident