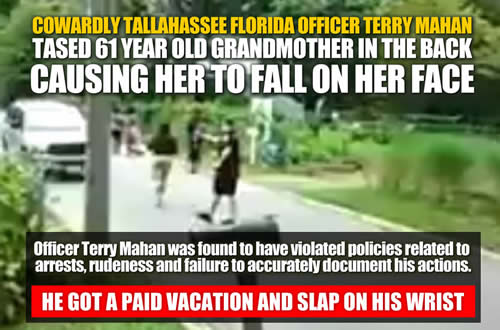 “Officer Terry Mahan had the opportunity to verbally communicate with Ms. Young and should have tried to de-escalate the situation. Based on her apparent physical abilities, Ms. Young did not present an imminent threat to Officer Mahan or other officers as she walked away from him.”

Officer Terry Mahan of a Tallahassee police officer is under investigation and on paid leave after he was caught on camera deploying a taser into an unarmed 61-year-old woman’s back as he was attempting to arrest her.

Officer Terry Mahanof a Tallahassee police officer used a Taser on a 61-year-old woman in the back was placed on administrative leave Wednesday pending the outcome of an internal-affairs investigation.

A nearly seven-minute video, which was recorded by an onlooker with his cellphone, shows Officer Terry Mahan tasing Viola Young in the back Tuesday as she walked away from him in the middle of a city street in broad daylight. Young went motionless before falling face-first onto the pavement.

Police Chief Michael DeLeo held a middle-of-the-night news conference to announce the measures taken against Mahan. The department also released the cellphone video, posting it to the department’s YouTube channel.

The incident, which happened about 5:20 p.m. in Frenchtown, sparked vocal outrage among those who witnessed it. One woman can be heard on the video repeatedly screaming, “Oh my God!” “They just tased a lady for nothing,” one man can be heard saying on the video. “They wonder why they’re hated.”

DeLeo, in the news conference, said that based on the video, he had “enough concerns” to place Mahan on leave and conduct an internal investigation.

Officer Terry Mahan was suspended without pay for four weeks. When he returns to duty, he will have to undergo mandatory training in de-escalation skills and will be transferred from his current assignment. Woods received two days of unpaid suspension. The suspensions begin Wednesday.

“Although the actions of Officer Terry Mahan were legal, his actions did not reflect the expectations of this agency, when he attempted to arrest Ms. Young and then utilized his taser,” DeLeo said. “Officer Mahan had the opportunity to verbally communicate with Ms. Young and should have tried to de-escalate the situation. Based on her apparent physical abilities, Ms. Young did not present an imminent threat to Officer Mahan or other officers as she walked away from him.”

Internal-affairs investigators, who penned a 418-page report, interviewed 25 witnesses and officers and considered an additional 35 pieces of evidence in making their determinations.

The investigation found officer Terry Mahan, 36, who joined TPD in 2012 after working for a decade with police departments in Georgia, violated department polices related to making arrests, reasonable use of the taser, failure to give verbal warning before its use and failure to try to calm down the situation.

Officer Terry Woods, 40, who was hired by TPD in 2010 after nearly eight years with the Florida Highway Patrol and made the initial stop and arrests on Dunn Street, was found to have violated policies related to arrests, rudeness and failure to accurately document his actions.