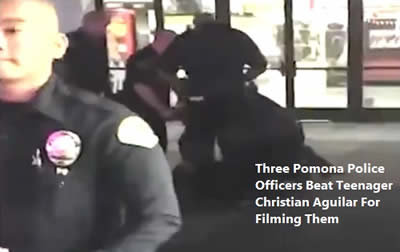 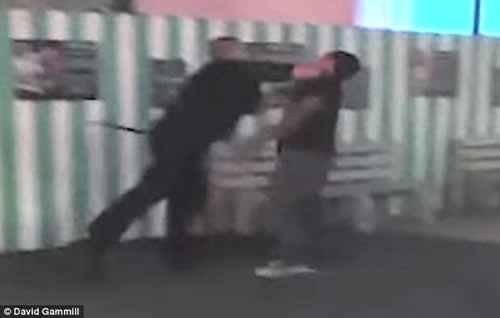 If it’s just one cop then why do they all go along with the perjury and fraud?
Furious family accuse police of cover-up after cop punch boy, 16, in the face and beat him with a baton ‘for no discernible reason

A family accused Pomona police officers of attempting to cover-up their 16-year-old son’s ‘brutal’ arrest after cops punched him in the face and beat him with a baton ‘for no discernible reason’ Christian Aguilar was enjoying an evening out with his family at LA County Fair last September when Pomona police arrested his father, Ignacio Aguilar Jr, and his cousin Gabriel for allegedly being too drunk. Christian, who is now 17, watched the incident unfold and took out his cell phone to record it, as his relatives had only drunk one beer and he felt they were being unfairly targeted.

Despite filming from 30ft away, the teenager claims a Pomona police officer by the surname Jensen grabbed him by the arm and dragged him away to nearby a fence. ‘What should have been an evening of family fun ended with unprovoked police brutality,’ according to a lawsuit filed by the Aguilar family.

Pomona Police Officer Jensen punched Christian in the face despite him making no effort to resist the cop, the lawsuit claims.

As he stood stunned by the first blow, Officer Jensen allegedly struck the teenager in the face again as other cops rushed in to help. The lawsuit states that Christian kept his hands by his side as Officer Hutchinson placed him in a hold and a cop called Officer Correa hit him in the leg with his baton. The boy allegedly shouted that he was a minor as officers crowded round and one threatened to use a Taser on him.

A lawsuit filed against Pomona police this week alleges department officials presented doctored evidence to prosecutors after officers attacked a 16-year-old boy out with his family last year at the Los Angeles County Fair.

“It’s a completely unjustified beating of a teenager by a gang of cops,” David Gammill, attorney for the Aguilar family, said by phone. “There was no reason to stop him.”

“I can confirm for you that the use of force incident is currently under internal investigation,” said Deputy Chief Mike Olivieri with the Pomona Police Department. “We are also aware of a pending lawsuit. Considering that, there is not much we can say at this point.” Olivieri denied that evidence submitted to the Los Angeles County District Attorney’s Office was doctored.

Christian Aguilar, then 16, of Pomona went to the fair Sept. 16 with his brother Ignacio Aguilar IV, father Ignacio Aguilar Jr. and a cousin, identified as Gabriel. After Gabriel exchanged words with a Pomona police officer, Gammill said the elder Aguilar tried to defuse the situation, but instead, both he and Gabriel were arrested. As they were being escorted out, Christian pulled out his cellphone and began filming the incident, said Gammill. In Christian’s video, an officer, identified in the lawsuit as Officer Jensen, says something to the teen, who responds that he’s leaving.