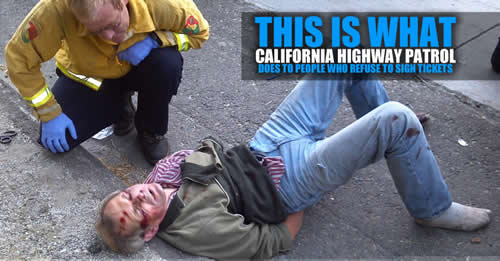 California Highway Patrol Officer Andrew P. Murrill Beat an unarmed man solely because he would not sign a ticket and requested to first read it.

A trucker allegedly assaulted by the California Highway Patrol Officer Andrew P. Murrill while reading a traffic citation has settled his case out of court.

On Sept. 2, 2011, Olegs Kozacenko, 57, was driving a 2012 Freightliner for an intrastate trucking company. About 4 a.m. a Truckee, Calif., Agricultural Station inspection officer spoke to Kozacenko, checked his papers and cleared him. Twenty-two miles later, an officer at another inspection station verified his brakes were compliant.

Kozacenko, who has no criminal record, says CHP officers Andrew P. Murrill and J. Sherman stopped him without probable cause. They reviewed his CDL, logbook, bill of lading, proof of insurance and registration. Andrew P. Murrill then searched his sleeper without consent or explanation, but found no contraband.  The troopers got in their vehicle and left Kozacenko in his truck before returning and asking him to exit the vehicle.

They allegedly attacked Kozacenko without provocation while he was reading their citation for exceeding hours-of-service limit by driving 11 hours and 35 minutes.

In addition to Officer Andrew P. Murrill and Sherman, their superior officers, Sgt. Kevin Pierce, Lt. John Arrabit, Assistant Chief Kenneth Hill and Commander Chief Stephen Lerwill, were named in the complaint because they “failed to adequately supervise, investigate and discipline officers’ use of excessive force.”

The trial was originally set for February 2015 before being rescheduled for Feb. 8, 2016. In March 2015, the scheduling was modified to allow for mediation and a possible settlement.

It’s been almost two years since Olegs Kozacenko nearly lost his life during an encounter with Officer Andrew P. Murrill and another California Highway Patrol officer over a traffic ticket. Still, nearly two years later neither the CHP nor the state Attorney General’s office will confirm whether or not if Officer Andrew P. Murrill was ever disciplined for his actions, citing the law officer’s bill of rights.

But that answer didn’t satisfy Kozacenko. Now the 58-year-old truck driver has filed suit against the state of California and the Highway Patrol officers he says injured him. The purpose of the suit, he says, to find what he calls justice.

The case stems from a seemingly routine traffic stop on westbound Interstate 80  east of Reno in California’s Sierras.  “It was early in the morning about 5 a.m.,” Kozacenko told NBC Bay Area through a Russian interpreter.

Kozacenko can recount nearly every detail of that morning on Sept. 2, 2011. The Berkeley resident told NBC Bay Area he was heading home after a long haul across country when he was pulled over by a CHP patrol vehicle near the Drum Forebay offramp in Placer County.

It’s at that point in retelling his story that Kozacenko went silent. For 40 minutes he sat quietly, insisting he needed to talk, but the emotions were still too raw.

While Kozacenko sat silent, the pictures and emergency medical records he shared with NBC Bay Area speak for him.

According to private medical records taken from the emergency room immediately after the incident on the highway and shared by Kozacenko’s family with NBC Bay Area, the truck driver suffered life-threatening injuries including a crushed left orbital eye socket, multiple facial fractures, a broken left arm, a concussion, unconsciousness and possible neurological damage.

Medical records also show that he apparently stopped breathing while lying out on the highway and had to be rushed to Auburn Faith Hospital. But Kozacenko’s injuries were too severe for that  hospital’s emergency room and he had to be transported to UC Davis Medical Center in Sacramento.

The NBC Bay Area Investigative Unit wanted to know how an incident that began as a traffic stop, ended with a trip to a trauma center.

NBC Bay Area made several attempts to speak with the arresting CHP Officer, Andrew P. Murrill, but he declined to comment. Consequently, NBC Bay Area turned to official records to determine his version of events.

According to the officer’s initial CHP report and subsequent court testimony during an evidentiary hearing, Officer Andrew P. Murrill along with CHP officer Jim Sherman stopped Kozacenko at 5:40 a.m. The stop was made after the officers received a report of a sleepy driver at the brake check station five miles east of the scene.

In court Officer Andrew P. Murrill testified that Kozacenko refused to sign a ticket citing him for driving his truck for too many hours. As a result, he had to make a forcible arrest.

Kozancenko said he first wanted to read the ticket before signing.

Attorney(s) appearing for the Case 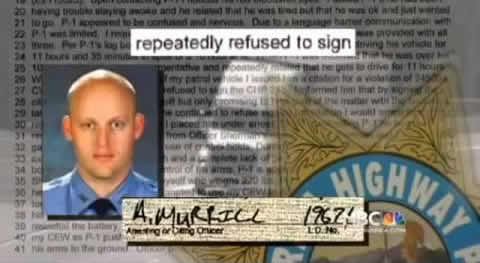 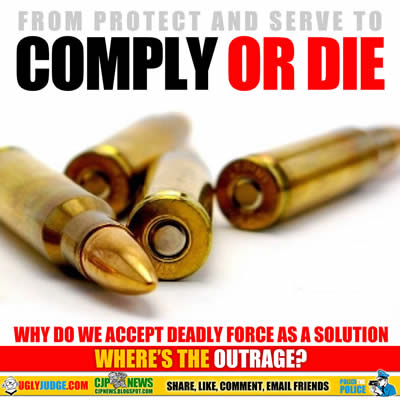