By admin Arizona, Articles, Government, How to Expose them, Lawyers, Moffatt Media, Who to Report them to 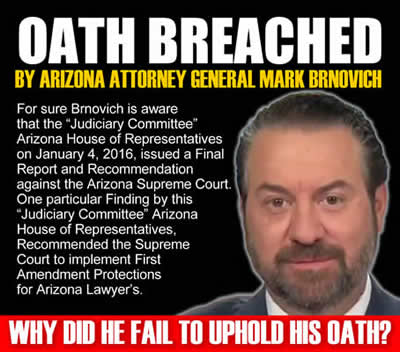 Whether Mark Brnovich, Arizona Attorney General, has breached his “Oath?”

Maybe a better question would be why has Brnovich failed to uphold his own “Oath” of Office guaranteeing Constitutional promises to the public and Arizona Lawyers?

HOW HAS BRNOVICH ARIZONA ATTORNEY GENERAL FAILED TO UPHOLD HIS “OATH” OF OFFICE:

Brnovich has failed to uphold his own “Oath” of Office, by failing to protect a certain group of people defined as Arizona Lawyer’s.

For sure Brnovich is aware that the “Judiciary Committee” Arizona House of Representatives on January 4, 2016, issued a Final Report and Recommendation against the Arizona Supreme Court.

One particular Finding by this “Judiciary Committee” Arizona House of Representatives, Recommended the Supreme Court to implement First Amendment Protections for Arizona Lawyer’s.

Fast forward to year 2021 and the Arizona Supreme Court has still defied Final Report with a Recommendation by its own legislative branch of government being the Arizona House of Representatives “Judiciary Committee,” to implement First Amendment Protections for Arizona Lawyer’s.

Thus, history shall not be forgotten when Former Sheriff Arpaio set up a Task Force, to investigate judicial corruption related to an approximate $330 Million Maricopa County Courthouse, to be built including underground tunnels all without Arizonan Voter Approval.

The Task Force consisted of “Andrew Thomas, Maricopa County Attorney, Lisa Aubuchon, Division Chief; and Rachel Alexander Deputy County Attorney.” … However, these former prosecutors claim they were all retaliated against even as government employees, for “blowing the whistle,” to expose judicial corruption, on Maricopa’s $330 Million Taj Mahal Courthouse.

According to Thomas, Aubuchon and Alexander, they were placed on the chopping blocks as targets. Thomas and Aubuchon did in fact suffer Disbarment-revocation of their professional Lawyer’s licenses, however, Suspension was only imposed against (Alexander), for six months and one day, that has the same effects as a Disbarment.

Essentially the Task Force Members (Thomas, Aubuchon and Alexander) were Disbarred for taking a stand to Speak Up and Speak Out, while only uttering words that they too assumed guaranteed to have First Amendment constitutional protections.

Contrary to the “Judiciary Committee” Arizona House of Representatives, identified in January 4, 2016, Findings and Recommendation Report, at Page 3, Section D, admitting the Supreme Court has failed to have policies in place to uphold First Amendment Constitutional Protections that protect Arizona Lawyer’s and recommended: “Arizona Supreme Court to modify … protect the first amendment freedoms of Arizona attorneys.”

Yet the issues of (Thomas, Aubuchon and Alexander) were in 2012, Brnovich has been derelict from 2016 and presently with assuring the Supreme Court to comply and implement First Amendment Protections for Arizona Lawyers, recommended by the “Judiciary Committee” Arizona House of Representatives.

Brnovich even closed his eyes when Arizona was sued back in August 2017, by an Arizona Lawyer, in Federal District Court. The same Arizona Lawyer, who has raised numerous constitutional infrastructure violations by the State of Arizona and State Bar of Arizona. Same $10 Million civil lawsuit against Arizona places the State in a precarious position, because Brnovich intentionally failed to file an Answer, to protect its State’s interest.

Two core issues raised in the $10 Million civil lawsuit against Arizona, still awaiting decision by the Federal District Court, Plaintiff raised constitutional challenges regarding: (1). invalid “Oath” of Office applicable to the same judge (2). not constitutionally seated on the Arizona Supreme Court bench from years 2010 through April 2021.

Brnovich has failed to uphold even his own “Oath of Office,” to include constitutional equal protections of Arizona Lawyer’s;

Bronovich’ promised: “I will enforce the Law” said in the May 7, 2020 statement, is nothing more than soundbite regurgitated political rhetoric;

Brnonvich, has even failed to file an Answer to the $10 Million Civil Lawsuit filed against the State in 2017;

Brnovich has allegedly participated in a public corruption coverup scheme conspiring with a judge (William J. O’Neil, Supreme Court of Arizona Presiding Disciplinary Judge) who was unconstitutionally seated on the Arizona Supreme Court bench from years 2010 through 2021.

Surely for all the foregoing reasons mentioned above warrant inclusion of ANY “Ethical or Criminal Investigation” against Brnovich.