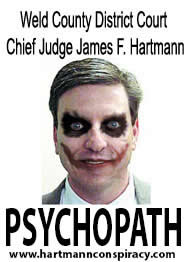 Where there is smoke there is fire and it’s common now for victims to do the only thing they can when victimized by criminals who hide behind images of power and control. The reason this happens is because government refuses to act or protect us even if we have evidence of crime and abuse.

Yet another dishonest judge who is allowed to freely abuse and commit crimes because of who he is.

In July, 2013 Longmont, CO homeowner Craig Buckley’s home was raided by Judge James F. Hartmann  and the Weld County District Court, and he was incarcerated for refusing to give the deed to his house to his former employers. Ten days later, Buckley’s home was raided again, and he was incarcerated for ‘Retaliation Against a Judge’ for alleged threatening statements he was purported to have made against Judge James F. Hartmann during the first illegal raid.

At issue is a civil wage claim case, filed by Longmont, CO homeowner Craig Buckley in the Weld County District Court, under the authority of C.R.S. 8-4-110(2) of the Colorado Wage Act. Buckley had sought an award of accrued wages due at the time of termination of employment from marble & granite countertop fabrication facility, (now defunct) Dream Stone, Inc.

According to DA Investigator Maggie Green, Judge James F. Hartmann admitted that, “by the end of the case, Buckley was only seeking compensation for his unused vacation. Judge Hartmann stated this was under $1000.” While Judge James F. Hartmann is inaccurate as to the amount of wages, penalties, interest and fees associated with accrued wages, and additional fees for dreamstoneinc.com web development by Buckley (in excess of $3000.00), his admission that the claim for accrued wages was brought before the Court by Buckley was correct. Full Story

The fact is you can have evidence and documented fact but the bar and government will believe the dishonest judge or public servant. They don’t want to admit they lie or are in fact dishonest yet this is very common

Think this does not happen, Google the name Cary-Andrew Crittenden who was railroaded a few years ago by anothe famous problem judge Santa Clara County Socrates Peter Manoukian 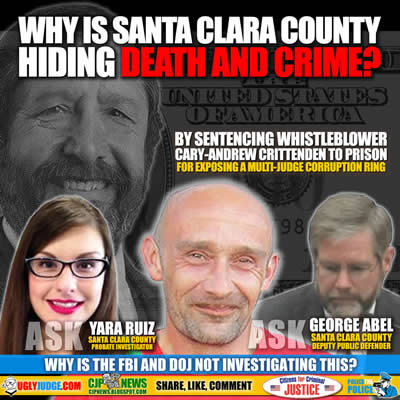