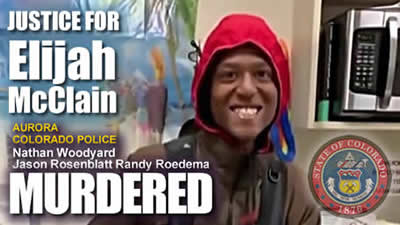 Elijah Jovan McClain was a 23-year-old black massage therapist from Aurora, Colorado, who died after being placed in a chokehold by police and being sedated by paramedics.

The fallout from the August 2019 death of Elijah McClain after a torturous encounter with Aurora police officers continues. The day after three cops with the Aurora Police Department were put on administrative leave for re-enacting the chokehold that likely contributed to the young black man’s passing and photographing it, the U.S. Attorney’s Office in Colorado revealed that its representatives are currently conducting a probe of the APD that involves the Federal Bureau of Investigation’s Denver branch and the Department of Justice Civil Rights Division — a potential precursor to placing the agency under federal oversight.

There’s no shortage of cases related to the Aurora police’s approach to race that deserve further scrutiny. In January 2019, ten months before McClain’s passing, we documented allegations of abuse by APD cops against thirteen people of color since 2003, resulting in settlements totaling around $4.6 million.

Here’s the joint statement about the current inquiry, released under the auspices of the FBI, the Justice Department and U.S.

In August 2019, police officers in Aurora, Colorado, approached 23-year-old Elijah McClain as he walked home from a convenience store. The Aurora Police Department later said that a 911 caller had reported a “suspicious person” in a ski mask, and that when officers confronted McClain — who was not armed and had not committed any kind of crime — he “resisted arrest.” In the 15 minutes that followed, the officers tackled McClain to the ground, put him in a carotid hold, and called first responders, who injected him with ketamine. He had a heart attack on the way to the hospital, and died days later, after he was declared brain dead.

McClain’s family maintains that law enforcement’s use of excessive force led to his death, and roughly a year-and-a-half later, a report commissioned by the Aurora City Council suggests that police lacked the legal grounds to stop McClain and to forcefully detain him. The officers involved in McClain’s death were previously cleared of wrongdoing, apparently on the basis of questionable body-camera footage and an allegedly inconclusive autopsy.

“This case is a textbook example of law enforcement’s disparate and racist treatment of Black men,” McClain’s family members and their legal team said in a joint statement on February 22, per ABC. “Aurora’s continued failure to acknowledge the wrongdoing of its employees only exacerbates the problem.”

VIDEOS ABOUT THE KILLING OF ELIJAH McCLAIN