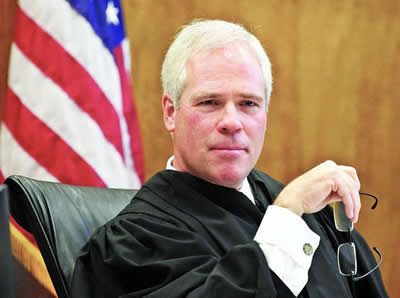 This Hitler-loving, gay-hating Oregon judge is so unethical that he might be a criminal, state panel finds

tate commission recommended the removal of an Oregon judge whose actions, they believe, are so unethical they might actually be criminal.

The Oregon Commission on Judicial Fitness and Disability filed a 48-page report urging the state Supreme Court to remove Judge Vance Day from the bench, reported The Oregonian.

The nine-member panel made the rare recommendation after determining in a two-week hearing that Day had undermined public trust by refusing to marry same-sex couples, hanging a portrait of Adolph Hitler, communicating improperly with a felon and allowing another felon to illegally handle a firearm.

“Judge Day shows no outward sign of comprehending the extent or nature of his ethical violations,” the commission wrote. “His misconduct is of such a nature as to impugn his honesty and integrity.”

The judge made news last year by urging his staff to postpone the scheduling of wedding ceremonies so they could investigate whether the couples were gay — which the commission said violated a federal court order overturning Oregon’s ban on same-sex marriage.

Day also made national news after including a portrait of Hitler in a “Hall of Heroes” gallery he set up at the Marion County Courthouse.

The county’s presiding judge ordered Day to remove the portrait of the Nazi leader, but he warned her not “to go there because some very influential people in this town want it up,” the commission found. FULL STORY

Marion County Circuit Court Judge Vance Day took the witness stand Tuesday, testifying during hearings which will determine if he violatedOregon’s judicial conduct standards. In a new revelation, Day testified that he has “taken a break” from presiding over the Veteran’s Treatment Court, citing the hearings before the Commission on Judicial Fitness and Disability.

Day has been charged with 13 counts of ethics violations. He denies the allegations and has said that, even if his conduct does violate the judicial code of conduct, the code is unconstitutional.

The first day of testimony was mostly opening statements: The prosecution said the case is about judicial integrity, the defense said it’s about Day’s decision to not marry same-sex couples.

Day’s case momentarily grabbed national attention, over an artwork display in the judge’s courtroom containing a depiction of Hitler. Day testified Tuesday that he did put up the collage, though the Hitler painting was taken as a war trophy and not meant to glorify Nazism. FULL STORY