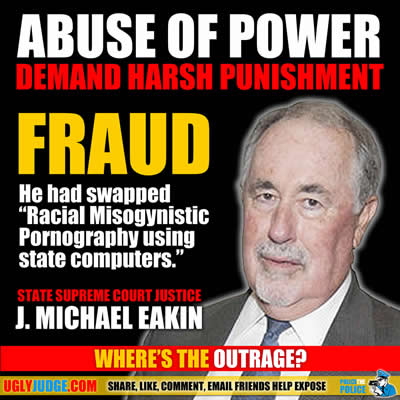 America Must demand harsh punishment for those in position of authority.
Far too many well paid public servants take advantage of their power and position victimizing Americans.
When exposed or caught they’re often allowed to retire, depart, unpunished and keep their huge benefits and pensions even going on to be rehired in another sector.

Saying he found it “disconcerting and embarrassing” that his private emails were public, Eakin said Tuesday night, “I sincerely apologize for such content.”

State Attorney General Kathleen Kane refocused attention on Eakin on Oct. 1, when she said he had swapped “racial misogynistic pornography using state computers.”
After Kane first ignited a scandal last year about offensive emails exchanged by state officials on work computers, both the Supreme Court and the state Judicial Conduct Board opened investigations.

The result: Former Justice Seamus McCaffery retired after he was tied to pornographic emails, but Eakin was cleared.

In a lengthy statement Wednesday, Kane vehemently rejected recent complaints from the Supreme Court and the judicial-review panel that she had withheld some of Eakin’s worst emails and sabotaged their investigations.

Kane said that Robert A. Graci, the chief counsel of the Judicial Board, had come to her offices last November and viewed emails that Eakin sent or received with “numerous videos and photos of nude women.”

Graci departed with a disc containing those messages, she said.

In a recent story, the Philadelphia Daily News provided a comprehensive account of Eakin’s emails. The paper cited few that were sexual, but detailed others with supposed jokes that portrayed blacks as lazy, referred to Mexicans as “beaners,” and made light of domestic viol