IN THE COURT OF COMMON PLEAS OF WESTMORELAND COUNTY, PENNSYLVANIA CIVIL ACTION-DIVORCE

DEFENDANTS BRIEF IN SUPPORT OF EXCEPTIONS FILED TO

ADDITIONALLY DEFENDANT OBJECTS TO THIS COURT HEARING ANY ARGUMENT ON THE EXCETIONS FILED BY ERIC BONONI, ATTORNEY WHALEN AND ” FULL DISCLOSURE WAS NEVER MADE AS PA LAW STATE NO SETTLEMENT CAN BE MADE WITHOUT FULL DISCOSURE.

JUDGE SMAILS AUGUST 30, 2016 ORDER VACATING MASTERS REPORT AND SETTLEMENT ORDER. DEFENDANT IS DEMANDING A NEW TRIAL BE GRANTED DUE TO THE FATAL DEFECTS IN THIS CASE AND THE CRIMINAL ACTS THAT HAVE BEEN USED IN THIS CASE TO DEFRAUD THE DEFENDANT OF HER CIVIL RIGHTS, CONSTITUTIONAL RIGHTS, DENYING HER OF HER OWN PROPERTY AND MONEY AND THE RIGHT TO A FAIR DIVORCE. BRIBING A MASTER, EX PARTE COMMUNICATIONS WITH THE USE OF FRAUDULANT STATEMENT TO THE COURT TO DEFRAUD DEFENDANT AND NOW , comes the defendant, Deborah Ann Bujdos, Pro Se to file the following brief in support of the Exceptions filed to the report of the divorce master, Eric Bononi, Esquire.

WHICH MAKES VOID THIS ENTIRE YEAR OF PROCEEDINGS IN YOUR COURTROOM

THE ARGUMENT SCHEDULED TO HEAR EXCEPTIONS IN THIS CANNOT BE HEARD DUETO THE FRAUD ON THE COURT.

This case has elevated from Civil to Criminal all statements of attorney Whalen’s in her brief are as usual false and fraudulent, with no facts and using hearsay, and her unfounded opinions regarding defendant . Attorney Whalen’s brief has been submitted with unclean hands and this court should enforce the unclean hands doctrine. As attorney Whalen begins her brief she implies the delay in this case is the defendants fault. That is the beginning of her lies she has submitted in her brief. This has been her patter for the last 4 years and she and the plaintiff are responsible for making this case long and contentious. The defendant has repeatedly provided the court with the proof needed to due to defend herself against the false allegations of attorney Whalen. The docket and all records prove she has repeatedly lied to the court. She has continued this case knowing that her client only wants to delay it to harass the defendant. Attorney Whalen has continued to churn fees and deplete the party’s marital income. More evidence of intentionally delaying this case is evidenced by the defendant’s request to deny the exclusive possession of the home hearings to avoid additional needless litigation pending the divorce. Judge Smail denied the defendants motion to deny that. After defendant remedied the original complaint of the homes taxes not being paid. Suspiciously the order showing the taxes were paid has been removed from the docket. Judge Smail deliberately ignored the proof defendant gave him supporting fraud on the court was used to make his eviction order. Due to his choice the parties have wasted another entire year in court by continuing with an illegal order from the recused judge Scherer that was granted to Attorney Whalen in an Ex Parte communication. The order was procured with fraud on the court to hear the exclusive possession of the home and to force defendant to be in front of divorce master before her discovery done.

should have been ordered.

BASIC CASE: CIVIL RICO THAT STEMMED FROM CRIMES COMMITTED IN A DIVORCE

West Moreland County in Pennsylvania. I filed a Civil Rico and focused on all of the crimes that were committed during my divorce.

The RICO CRIMES COMMITTED HERE IN THIS Corruption in the court involved Bribery, Fraud, extortion, financial suppression for 5 years, theft of my own retirement annuity income by deception,

VIOLATIONS OF PA LAW AND CODES OF CONDUCT.

I WAS DENIED ALL OF MY CIVIL AND CONSTITUTIONAL RIGHTS FOR 5 YEARS, INCLUDING DUE PROCESS, DENIED DISCOVERY, DENIED THE RIGHT TO BE HEARD, DENIED A FAIR TRIAL WITH AN UNBIAS JUDGE, DENIED CORRECT APL TO DEFEND MYSELF OR TO APPEAL THE UNCONSCIONABLE FINAL ORDER.

Judge Smail allowed my ex-husband and his attorney to Legally abuse me and delayed the case for five years so that they could all make more money.

The judges did not have jurisdiction to change an annuity contract and deny me my own monthly income. It was unlawful for the judges refuse to release my own income for my own defense. they denied me the funds to appeal the judges final order that was missing millions to divide. Then left me homeless after a 20year marriage at the age of 60.

This biased judge let my husband continue to place me in fear of him . Then evicted me from my home by way of docket tampering , they removed a filed document that proved paid the homes taxes and should have prevented any eviction. The judge left me , the domestic violence victim , no access to homeless during masters hearings before I had any funds to locate a new home or hire an attorney.

Judge Smail showed in open court that he hated me. Much can be seen on the transcripts and in witness statements who saw and heard how he . really hated me. He was determine to stay on my case until he could give my husband the entire $5 million estate including: the 1.4 million dollar commercial rented building that began paying us rent in 2004 and continues to pay him approx 13 thousand a month. Iwas left with no way to ever have any income.

Below is photo of the commercial building that was absent from the final order:

DOMESTIC VIOLENCE WAS ON GOING FROM 2012 UNTIL NOVEMBER 2017 AND IGNORED BY JUDGE SMAIL.

The Court knew I was a Domestic Violence Victim and for the time in history at least in this county they evicted me and left me homeless knowing I had no access to our funds to relocate . The let let my abuser move back in the marital home during the divorce when they knew he was collecting twenty grand a month after taxes and knew he had been living comfortably in a condo prior to evicting me.

I had been physically injured by my husband, in a drunken rage in July 2012 and seen on video. I did get a PFA that served no real protection. So I was abused by my ex husband and then by the courts will. legal abuse, my grandchildren my were living with me.

My grandchildren were also horrified and by the lack of protection from the court/ PFA . They should have provided us with protection . below is a post I have had on my FACEBOOK PAGED CALLED DOMESTIC VIOLENCE VICTIMS UNITED. 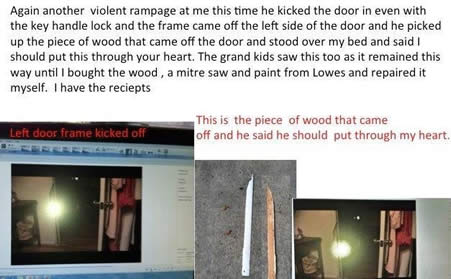 TRUTH IS REVEALED BY THE CHILDREN WHO WERE ALSO VICTIMS.

My granddaughter even gave an interview at the age of 12 to twig is radio I’ll post it it was so brave of her to do that because we were being threatened and the court failed to protect us.

The Corruption in the court allowed my ex-husband to Legally abuse me and delayed the case for five years so that they could all make more money. The Judge ignored the proof that the husbands attorney chose a master of her choice and was bribed with $10,000 taken out of retirement annuity income and held hostage by husbands attorney for 5 years. The judges did not have jurisdiction to change an annuity contract and deny me my own monthly income. It was unlawful for the judges refuse to release my own income for my own defense. they denied me the funds to appeal the judges final order that was missing millions to divide. Then left me homeless after a 20year marriage at the age of 60.

In the year 2012 while I was being tortured by my ex-husband and had a PFA on him after he injured my wrist I also had my grandchildren living there with me and they were traumatized by his constant stalking. And threatening that I wasn’t going to live very long. They were both only 10 and 12 at the time and they were also forced to be evicted from the home they grew up in at my house.

I was so proud of my granddaughter because she was so upset by what was happening she gave an interview to tweak his radio I have it attached it to this message.

None one of the laws were followed by our judges while we were all subjected to violence , eviction and having a PFA did nothing g to protect us

The evidence also reveals prima facie evidence of a judge Smail completely ignoring suborning perjury during a contempt hearing that he deliberately delayed for 9 months to please the opposition and this was a civil contempt hearing against Deborah for returning items that she never took from the home when he evicted her.

The reason judge was delaying this contempt hearing is evident the record shows he continued it while charging her $100 a day if she didn’t return things she never had or kept. This continued for nine months after which he ended up collecting $17,600 that he had in his possession for over a year and then notified her that he was placing it in the Judicial fundamental fund.

The unconscionably of this was not only regarding the loss of $17,600.00 but also involved him continuing to deny me access to my retirement income they held hostage at the same time.

Judge Smail unconscionably denied me my own funds again when heard my a motion in January 2017 to release $17,000.00 that I needed for emergency oral surgery. he was presented with the oral surgeons report / x-rays confirming the fact that I needed emergency surgery.

Judge Smail denied me my own money for health care. Today I still haven’t been able to afford the surgery .

husbands attorney. refuses to release my money so I can get an attorney REDACTED

Comments or questions are welcome.

Last Updated on 7 months by admin